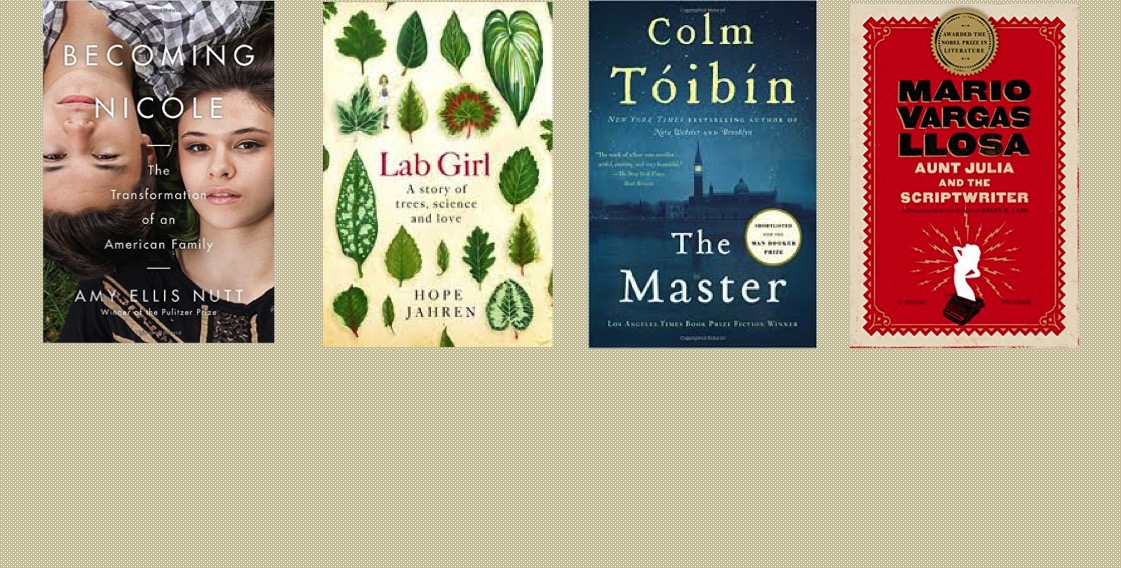 Perhaps reading more good books is a New Year’s resolution. Or perhaps you already read a lot and are looking for people to discuss books with. Either way, this is a good time to consider the Library’s two book clubs, which typically go on hiatus in January but start up again at the beginning of February, continuing through June. In other words, if you’d like to get involved in either club starting in February, there’s still plenty of time to read the February books!

With that in mind, in this Bookmark we are taking a look at each of the club’s book selections over the next five months. Since there is no obligation to attend every meeting, you can simply come – and read – when it works for you. No sign-up required. Book Club selections are usually available at the circulation desk, and, additionally, some books may be available on the e-book service OverDrive and as audiobooks as well. Check out the options under the “eLibrary” tab on this site.

Below are the books, synopses and meeting dates. The After-Dark Book Club’s page on the Library web site is here, and the one for the 2nd-Friday Book Club, here. It’s always a good time to read – and discuss – a good book!

The After-Dark Book Club Selections, February Through June
February 2: The Witch of Lime Street: Seance, Seduction and Houdini in the Spirit World by David Jaher. This book covers the contretemps between Houdini — yes, that Houdini — and Mrs. Mina Crandon, a psychic who resides at 10 Lime Street, Boston in the years after World War I. It seems that in addition to his work as an escape artist, Houdini spent part of the era debunking the world of mediums and psychics, and meets his match with the upper class Mrs. Crandon.

March 9 (NOTE: This is the second Thursday in march): Aunt Julia and the Scriptwriter by Mario Vargas Llosa. This novel, first published in Barcelona in 1977 by the Peruvian Vargas Llosa, is a comic novel that intertwines the story of a young man named Mario who falls in love with and marries the older “Aunt Julia” who is not a blood relative but is the sister of his uncle’s wife. But the other key character is the scriptwriter with whom Mario works at a radio station — Pedro Camacho — who is eventually driven to confusion and madness with the intertwining plots of his soap operas.

April 6: Becoming Nicole: The Transformation of an American Family by Amy Ellis Nutt. This work of non-fiction, written by Washington Post reporter Nutt, follows the story of the Mainses, a couple who adopts identical twin boys; the birth mother is the mother’s cousin. Within a few years, the family discovers that one of the boys, Wyatt, is insistent on being a girl, asking his mother: “When do I get to be a girl?” She eventually becomes Nicole. According to a book review in The New York Times, “’Becoming Nicole’ [delves] deep into the case of a single family with a transgender child and discovering in its particulars certain universal truths about the ways children arrive in one’s life already themselves.”

May 4: Under the Udala Trees by Chinelo Okparanta. This novel, Okparanta’s first, is a love story between two girls in the emerging nation of Nigeria. Ijeoma, the main character, falls in love when she meets a girl from a different ethnic community. They are both refugees from Nigeria’s civil war. Ijeoma comes to understand that she cannot be open about her love – and the book also deals with the parallel theme of the country’s struggle to develop its own identity.

June 1: The Last Painting of Sara De Vos by Dominic Smith. This 2016 novel intertwines two identical paintings, and two women. One painting “The Edge of the Wood” was painted by the character Sara De Vos, who lived in the 1600s in Amsterdam; the other painting is a forgery painted by an art historian, Eleanor Shipley, in the 1950s. This novel, which moves back and forth in time, has many intriguing elements, among them the fact that when the original is stolen and replaced by the fake in the 1950s, a string of bad fortune in the family who owns it suddenly changes. Was the original painting cursed?
The 2nd-Friday Book Club Selections, February Through June
February 17 (NOTE: This date is the third Friday of February): Plainsong by Kent Haruf. This 1999 novel takes place in the fictional town of Holt, Colorado, located in the high plains east of Denver. It sketches out the world of Holt, a place where two young brothers, Ike and Bobby, watch their mother lose her mind and where a pregnant teenager, Victoria, is finally taken in by two elderly, unmarried brothers, who decide late in their lives that they want change.

March 10: The Master by Colm Tóibín. Even though this is considered a novel, it focuses on Henry James, the renowned, American-born English writer. It covers five years of James’ life, starting with the horrible reception he receives for his play, Guy Domville, upon its London debut — although it also covers other times in his life. Said The New York Times Book Review: “The Master is unquestionably the work of a first-rate novelist: artful, moving, and very beautiful.”

April 14: Binocular Vision by Edith Pearlman. This is the fourth book in a series of short story collections, originally written in 2011. According to a New York Times review: “Thematically, many of the stories are explorations of the postwar Jewish diaspora. Pearlman’s characters struggle with relocation and disconnection, the complexities of cultural, religious and linguistic loyalties.” Characters include Marta Perera de Lefkowitz, a Polish-Jewish doctor now serving as minister of health in a South American dictatorship; and Sonya and Roland Rosenberg, emigres to New York who used to run a displaced persons camp in Germany — but this collection abounds with many more.

June 9: The Noise of Time by Julian Barnes. Like The Master, this is also a novel that centers on a real person, in this case Dmitri Shostakovich, a Soviet composer who lived from 1906 to 1975. The book deals with how Shostakovich dealt with being a composer under Soviet rule. At one point, having irritated Stalin with one of his works, he is afraid he will be sent to Siberia – or worse. Even though he escapes that fate, the novel is about how he was “forced into joining the Party and compelled, constantly, to weigh appeasing those in power against the integrity of his music.”

We look forward to seeing you at a library Book Club this winter and spring!