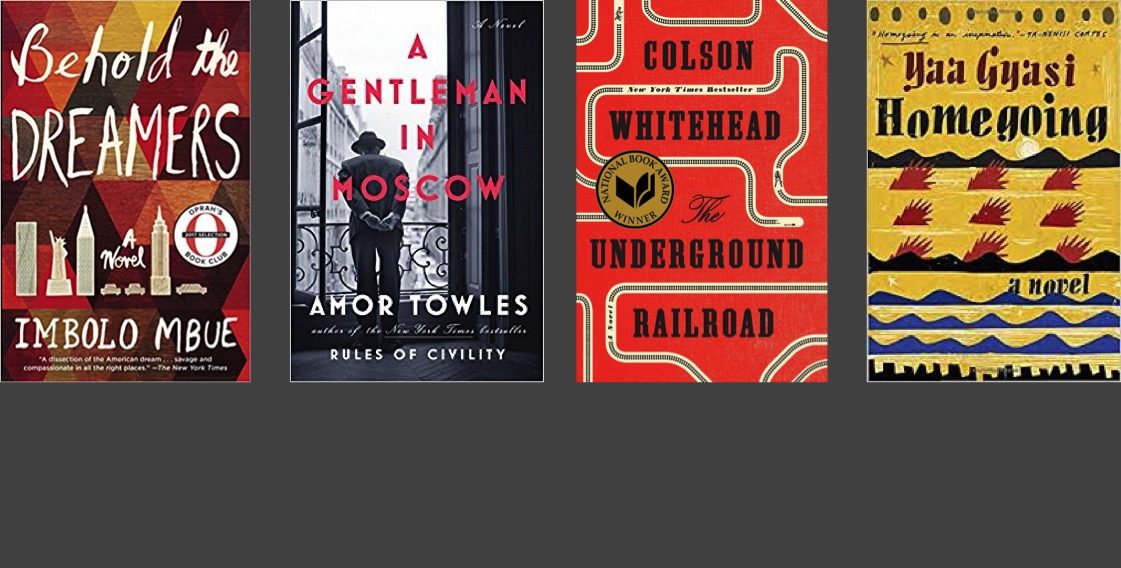 See What the Library’s Book Clubs Are Reading This Year!

At the Town of Pelham Public Library, there are not one, but two book clubs, that anyone can join at any time. Here are synopses of the books that each club will be reading each month through the end of June. It’s a great mix of fiction and non-fiction that takes readers from Indiana to Moscow, and from eighteenth century Ghana to the 2008 financial crisis in the U.S.

February 1: Destiny of the Republic: A Tale of Madness, Medicine and the Murder of a President by Candice Millard. This work of non-fiction tells the story of President James Garfield, and his assassin Charles Giteau, who imagined himself responsible for Garfield’s election and thought he should be consul general to France. In a familiar tableau, Giteau’s mental instability worries his family, but he manages to buy a cheap gun and kill Garfield. The twist is that it took Garfield eleven weeks to die, as his doctors’ sloppy, misguided attempts to cure him failed. A review in the New York Times Book Review said, “Though Garfield’s death had little historical significance, Millard has written us a penetrating human tragedy.”

March 8: The Tea Girl of Hummingbird Lane by Lisa See. This 2017 novel takes place in China, among an ethnic minority, the Akha, living in the remote Yunnan province — and also in Los Angeles. What unites the two disparate locations is a young Yunnanese woman, Li-Yan, who has a daughter out of wedlock. She abandons her daughter – leaving a tea cake from her region in the baby blanket – and the girl, Haley, is adopted and raised in the U.S. The tea cake provides a clue for Haley that will eventually reunite birth mother and daughter. Said Helen Simonson in a review in The Washington Post, “A lush tale infused with clear-eyed compassion, this novel will inspire reflection, discussion and an overwhelming desire to drink rare Chinese tea.”

April 5: Lillian Boxfish Takes a Walk by Kathleen Rooney. The character Lillian Boxfish of this book’s title was inspired by Margaret Fishback, who was once the highest paid female advertising copywriter in the world. Author Rooney concocts a tale in which Boxfish takes a 10-mile jaunt through her beloved New York on New Year’s Eve while in her 80s, and reflects on her life. A review in the Chicago Tribune says: “Rooney proves herself to be a tireless puppeteer in Lillian Boxfish — a writer with no apparent end of the cleverly turned phrase, the thoughtful insights into advertising, the intelligent musings on the process of creation.”

May 3: Behold the Dreamers by Imbolo Mbue. This 2016 debut novel from Mbue, an American who emigrated from Cameroon, follows the immigration story of a young Cameroonian couple who land jobs working for a Wall Street titan and his wife just before the 2008 financial crisis rocks all of their worlds. According to a review from NPR, “It’s a novel that depicts a country both blessed and doomed, on top of the world, but always at risk of losing its balance. It is, in other words, quintessentially American.”

June 7: Homegoing by Yaa Gyasi. Homegoing follows the divergent paths of two half-sisters who are unknown to each other, in a tale that starts in Ghana in the eighteenth century. As one sister marries an Englishman and lives a comfortable life, the other is sold into slavery. The book weaves its way through eight generations of the sisters’ descendants. Among this book’s other accolades, it was given the PEN/Hemingway Award for Best First Novel in 2017.

February 9: The Innocent by Ian McEwan. Set in Cold War Berlin, this novel follows a British postal technician, Leonard Markham, who finds himself among those responsible for building a tunnel into East Berlin that will allow British and U.S. intelligence to access Russian communication. As he loses his political innocence through his work, he also loses his romantic innocence through an affair with a married West Berlin woman and these two aspects of his life become intertwined in disastrous fashion. Said Publishers Weekly:  “Though its plot rivals any thriller in narrative tension, this novel is also a character study–of a young man coming of age in bizarre circumstances, and of differences in national character: the gentlemanly Brits, all decorum and civility; the brash, impatient Americans; the cynical Germans.”

March 9: A Gentleman in Moscow by Amor Towles. This novel tells the story of a World War II prisoner in Russia — but the prisoner, Count Alexander Rostov, who has been deemed a “Former Person” by the ruling Soviets, is sentenced to house arrest at the luxurious Metropol Hotel, which he turns into his own small world. Annalisa Quinn writes for NPR: “A Gentleman in Moscow is a novel that aims to charm, not be the axe for the frozen sea within us. And the result is a winning, stylish novel that keeps things easy.”

April 13: The Underground Railroad by Colson Whitehead. This novel’s twist is that the Underground Railroad isn’t just a metaphorical way of explaining how slaves escaped to the north, but also an actual underground railroad, that transports the young slave girl Cora away from a Georgia cotton plantation and to South Carolina and Indiana among other places. But even as she moves further away from Georgia, she finds that each place she spends time in has been negatively impacted in different ways by slavery. According to Juan Gabriel Vasquez in The New York Times Book Review: “The Underground Railroad is Whitehead’s own attempt at getting things right, not by telling us what we already know but by vindicating the powers of fiction to interpret the world. In its exploration of the foundational sins of America, it is a brave and necessary book.”

May 11: The Secret Scripture by Sebastian Barry. Against a backdrop heavy in Irish history, the focus of The Secret Scripture is Roseanne McNulty, a centenarian resident of the Roscommon Regional Mental Hospital. When it becomes clear that her long-term home is going to be demolished, she begins to write a chronicle of her life, and her story is intertwined with that of Dr. Grene, her psychiatrist. According to Joseph O’Connor in The Guardian: “[Barry] makes enthrallingly beautiful prose out of the wreckage of these lives by allowing them to have the complication of actual history in all its messy elusiveness.”

June 8: Between Them: Remembering My Parents by Richard Ford. This memoir of his parents, by fiction writer Richard Ford, is, in a sense, two memoirs. The first, about his father, was written recently, although he died in 1960; the second one, about his mother, was written in 1981 just after her death. But, according to a review by Cheryl Strayed in The New York Times, it is not just about Ford’s parents: “In showing his mother and father to us, Ford — an ordinary child, who grew up to become one of our most distinguished fiction writers — has, inevitably, shown a fair portion of himself.”