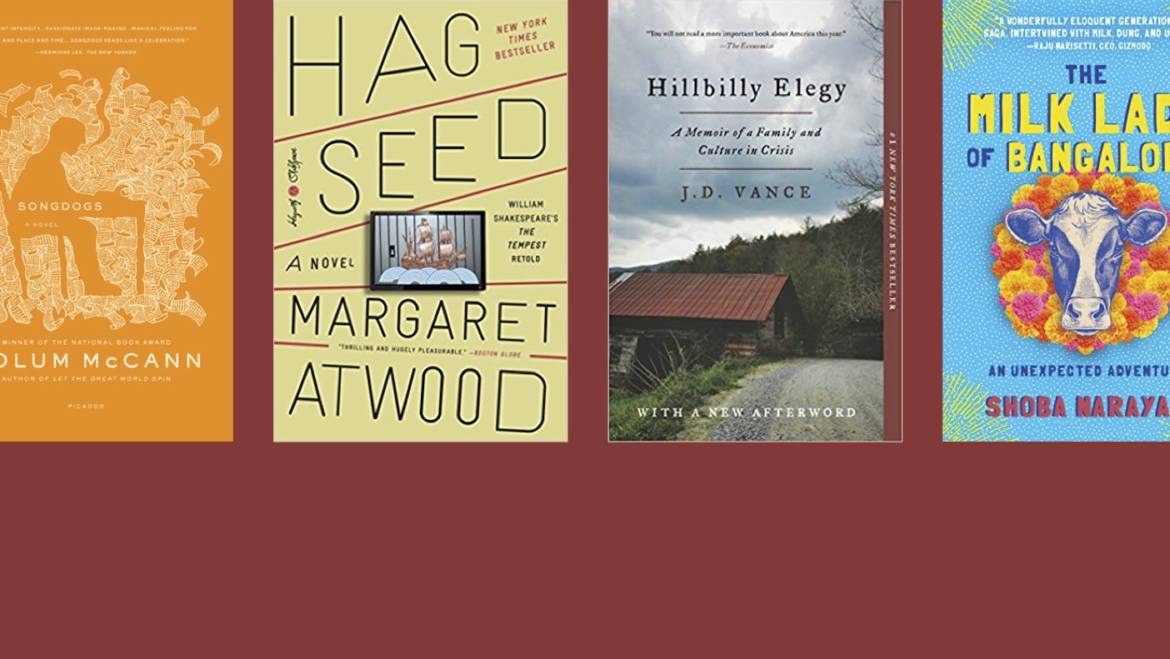 Bookmark: From Bangalore to Appalachia, the Library’s Book Clubs Take Readers to Places Far Away

In deference to Dr. Seuss — Oh, the places you’ll go if you come to one of the Library’s book clubs for adults over the next six months! Bangalore, New Orleans in the 1950s, Appalachia, South Africa in the early 1900s and more!

In addition to the wide variety of books you can read by being part of one of these book clubs, they carry the added advantage of being completely open to the public – drop in when the time, and that month’s book, suits you.

The 2nd-Friday Book Club meets on the second Friday of each month from 10:30 – 11:30 a.m. The After-Dark Book Club usually meets on the first Thursday night of the month and is from 7:30 – 8:30 p.m. Extra copies of book club selections are usually at the Circulation Desk, or you can find them through the Library’s e-resources like OverDrive.

Below are brief synopses of what the clubs are reading through June. (After June, they go on hiatus until September.) Enjoy!

February 8: The Milk Lady of Bangalore: An Unexpected Adventure by Shoba Narayan
This work of non-fiction focuses on the relationship between the author and the “milk lady” Sarala. Upon returning to India after years in the U.S. with her husband and two daughters, Narayan first encounters Sarala as she is taking a cow up their building’s elevator for a housewarming ceremony in another apartment. When Narayan asks Sarala to also bless her family’s new apartment, their friendship begins.

March 8: Hag-Seed: William Shakespeare’s The Tempest Retold by Margaret Atwood
Those already well-acquainted with Atwood’s The Handmaid’s Tale, will enjoy this retelling of The Tempest, Shakespeare’s play of repentance, revenge, forgiveness and the pursuit of power. Hag Seed features a character, Felix, who restages The Tempest with a cast of prison inmates. According to the book’s description, it “ … leads us on an interactive, illusion-ridden journey filled with new surprises and wonders of its own.”

April 12: The Liars’ Club by Mary Karr
This compelling 2005 memoir focuses on the hardscrabble childhood Karr experienced in an east Texas oil town. Her family includes a father who drinks too much and a mother who has remarried — many times. It was described by USA Today as “funny, lively, and un-put-downable… ”

May 10: Anil’s Ghost by Michael Ondaatje
Ondaatje, best known for his novel The English Patient, sets this story in Sri Lanka. The main character is forensic anthropologist Anil Tissera, who returns to her native country by way of an international human rights group trying to uncover the organized campaign of murder taking over the island during its late twentieth century civil war.

June 14: The Moviegoer by Walker Percy
Winner of the National Book Award in 1961, this was the first novel written by Walker Percy, who became one of the major literary voices of the South. Percy’s novels were often focused on the theme of the modern world’s disruption and alienation and such is the case with The Moviegoer. The moviegoer is young New Orleans stockbroker Binx Bolling, who searches for meaning in life, at first by obsessively going to the movies, until things take a different turn at Mardi Gras.

After-Dark Book Club
February 7: Pachinko by Min Jin Lee
Pachinko follows four generations of a Korean family beginning in 1911. The relationship at its center is that between Sunja, a 17-year-old Korean girl, who falls in love and gets pregnant by a handsome, wealthy – and unbeknownst to her – married middle-aged man, Hansu. Although she marries a Christian missionary to save her and her son from shame, Hansu (who is also a gangster) is never really out of the picture.

March 7: Songdogs by Colum McCann
In this 1995 novel, the narrator, Conor, returns to Ireland after an absence of five years. He is determined to retrace the footsteps of his father’s life as photographer and adventurer, who had traveled to Spain and then, Mexico– where he met and married his wife, Conor’s mother. She disappeared mysteriously when Conor was 12.

April 4: Hero of the Empire: The Boer War, a Daring Escape, and the Making of Winston Churchill by Candice Millard
This book details Winston Churchill’s time in South Africa at the turn of the twentieth century, and specifically the events that he once said would “ …  lay the foundations of my later life.” After being taken prisoner in 1899 when he was a journalist covering Britain’s colonial war with South Africa’s Boer rebels, Churchill escapes, enlists, comes back to South Africa and frees his once fellow prisoners. These long-ago adventures set the stage for his emergence as one of the towering figures of the twentieth century.

May 2: On Canaan’s Side by Sebastian Barry
On Canaan’s Side is a novel composed of journal entries by an 89-year-old Irish émigré, Lilly Bere, who begins writing as a way to cope with the loss of her grandson, Bill, to suicide. In recalling her life, Lilly details the forces that brought her and her husband to the United States – the fact that her husband, who fought for the British, was viewed as a traitor by the IRA.

June 6: Hillbilly Elegy: A Memoir of a Family and Culture in Crisis by J.D. Vance
On its surface, this acclaimed 2016 memoir sounds like an American success story, as its author, J.D. Vance, grows up poor in the Rust Belt and then goes on to join the Marines and graduate from Yale Law School. In truth, it’s about the struggles of his own family, giving readers a close-up look at the decades-long struggles of America’s white working class.