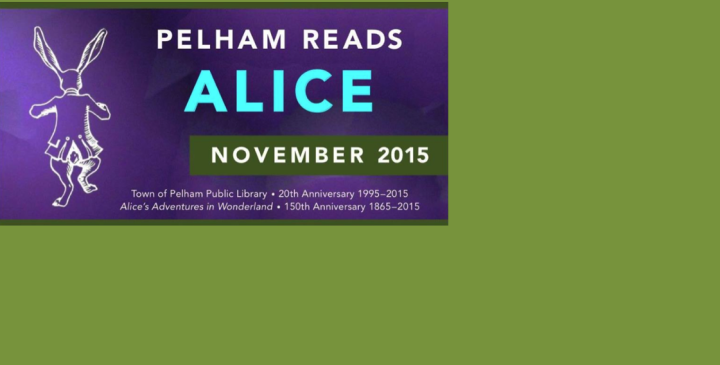 Pelham Reads Through This Sunday, Plus the Story Behind Pelham Reads’ “Alice in Wonderland”

For Pelham Reads Activities, see below. For the full Bookmark story explaining how Alice in Wonderland came to be, scroll down.

1:30 p.m. and continuing throughout the afternoon: There will be 19th century children’s toys, games and amusements, including – weather-permitting – croquet and other activities on the lawn, provided by the Bartow-Pell Mansion Museum. Arts and crafts will include the opportunity to make a thaumatrope, a 19th century toy that creates an optical illusion.

1:45 p.m.: Karen Lambdin of Bartow-Pell will do a presentation about 19th century children’s games.

3:30 p.m.: “The Dark Side of Alice,” a talk by Donna Paparella, author and professor of English at Hunter College.

(Note: All usual Library services will conclude at 4 p.m.)

Nighttime Kickoff Celebration
Saturday, November 7, 7:30 p.m. Pelham Art Center
Alice’s Adventures in Wonderland is the exciting visual and thematic muse for this year’s Studio Café at the Pelham Art Center and the nighttime complement to the kickoff celebration at the Library. This casual, fun event will feature live jazz, signature dishes from local restaurants, wine, cocktails – including a Mad Hatter special! – and a range of exciting original art, including Alice-inspired works, in silent and live auctions. Tickets for this event, a fundraiser for the Art Center, are $75 in advance and $85 at the door. Purchase at pelhamartcenter.org or by calling 738-2525, x111.

Pelham Reads Volunteer Opportunities
Students who need community service hours can still volunteer to help out at the November 7 Pelham Reads kickoff or the November 11 activities at the Library. For more information or to sign up, go to http://tinyurl.com/pelhamreads or contact Judy Shampanier at jshampan@gmail.com.

Some Library activities during Pelham Reads received funding from a gift in memory of Karin and Ted Mayer. Since “Pelham Reads” is a community celebration, not all programs are free or Library-sponsored.

ALICE IN WONDERLAND: THE BACK STORY

Few books have woven themselves as completely into popular culture as Alice’s Adventures in Wonderland, known more commonly as Alice in Wonderland. As the classic book celebrates its 150th anniversary, it is a fitting subject for “Pelham Reads,” which takes place from Saturday, November 7, through Sunday, November 15.

Like the first “Pelham Reads” two years ago – which focused on Mary Wollstonecraft Shelley’s Frankenstein – the celebration of Alice is a community-wide happening, featuring events not only at the Town of Pelham Public Library but also at the Pelham Art Center, The Picture House and the Daronco Town House. The Bartow-Pell Mansion Museum is also involved. “Pelham Reads” is being organized by the Friends of the Pelham Public Library. (A listing of all “Pelham Reads” activities is with this article.)

A Book for the Ages, and for All Ages

It’s easy to see why Alice in Wonderland has had such staying power both for children, for whom it was originally written, and for adults trying to plumb its deeper meaning. Its fantastical group of characters range from Alice herself, who goes from small to tall and back again, to a blue caterpillar who smokes a hookah and a living Queen of Hearts. And then there are the events. There’s the infamous Mad Tea Party, of course, but what about that game of croquet in which flamingos are the mallets and hedgehogs are the balls?

The book has kept readers fascinated – and a bit perplexed – since it was first published as illustrated by the author in 1865 and has inspired any number of artists, ranging from Jefferson Airplane to Joseph Papp, Sammy Davis Jr. and Marilyn Manson (!).

But What Inspired the Book?

The story of Alice begins on July 4, 1862, when Charles Lutwidge Dodgson took a leisurely afternoon boating trip up the Isis River near Oxford with the three young daughters of Oxford vice chancellor Henry Liddell. As they made their way up the river, Dodgson told them a story about a bored little girl named Alice who goes looking for an adventure. As you might recall, the beginning of the book – where the White Rabbit first makes his appearance – takes place on a riverbank.

Dodgson was, in fact, Lewis Carroll, the pseudonym under which Dodgson wrote Alice and its 1871 sequel Through the Looking-Glass. The middle of the three Liddell sisters – 10-year-old Alice – begged Dodgson to write the story down and the foundation for the classic book had been laid.

The first version – which does not include the Cheshire Cat or the chapter about the Mad Tea Party – was given to Alice as an early Christmas gift. Called Alice’s Adventures Under Ground, it reflected the world that was revealed to Alice when she fell down what has become the world’s best-known rabbit hole. It has also been speculated that the book was partially inspired by London’s Underground, which opened in 1862, just a few years before the book was published. (After this Bookmark’s original publication, the British Library reached out to us and sent us this link to a version of Alice’s Adventure Under Ground that is now available online and has been in that Library’s possession since 1948.)

The first edition of the book wasn’t necessarily a critical success, though its early fans supposedly included Queen Victoria. According to some early reports, its unforgettable illustrations – by the illustrator John Tennille – got more notice than the story. (The real Alice was a brunette instead of the blonde featured in the illustrations.) But since its first publication, Alice has never gone out of print, and it’s been translated into approximately 175 languages.

However, despite the book’s continuing ubiquity – the most recent movie adaptation was Tim Burton’s version in 2010 and there’s a sequel in the works – perhaps what makes Alice so compelling is the fact it can never be fully understood. As Robert Douglas-Fairhurst recently wrote in The Guardian: “One of the strangest creatures Alice meets in Wonderland is the Caterpillar, who languidly asks her ‘Who are you?’ and receives the uncertain reply: ‘I – I hardly know, sir, at present – at least I know who I was when I got up this morning, but I think I must have been changed several times since then.’ Alice’s confusion is understandable – over the course of her adventures she is variously mistaken for a housemaid, a serpent, a volcano, a flower and a monster. Today the Caterpillar’s question would be even harder to answer. Who is Alice?”

Perhaps while participating in “Pelham Reads,” our community of readers will get closer to finding out.

(This story originally appeared on Pelhamplus.com on Thursday, October 8, 2015.)