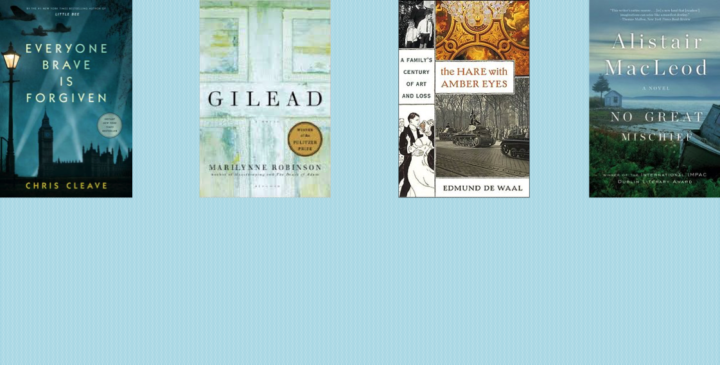 Bookmark: This September, Is It Time to Join a Book Club? The Pelham Library Has Two Great, Flexible Options

Many of us equate summertime with the chance to read a good book—or two—but find that the hectic days that start in September pre-empt us from doing what we’d really like to do—participate in a book club.

The Town of Pelham Public Library has an answer for that: its two adult book clubs, which are open to the public and allow readers to come during the months they can. It’s a terrific way to have the book club experience on your own terms. As of last fall, the Library’s options have expanded with the addition of the 2nd Friday Book Club, meeting at 10:30 a.m. on the second Friday of each month. The Library’s long-time evening club, the After-Dark Book Club, generally meets the first Thursday of every month at 7:30 p.m. (The full list of 2016-17 After-Dark Book Club books is here; the full list of 2nd-Friday Book Club books for the year is here.)

Both clubs offer a wide selection of books. The 2nd Friday Book Club is facilitated by Carol Ipsen, a Pelham resident, former Newsweek journalist and book club devotee, who took the helm of the new book club last year. “A book club experience should be all no-pressure reading pleasure,” Ipsen said. “Join the discussion, or just relax and listen. But I can’t imagine you not wanting to talk about The Hare With Amber Eyes.” (See below for more on this fascinating book about the Ephrussi family, which the club will discuss in October.)

Adult Services Librarian Augusta Turner leads and manages the After-Dark Book Club. The clubs run from September through June, with a one-month break in January. “We have a diverse group of members who often have different reactions to the same book based on their life experiences and backgrounds,” said Turner. “Members often say that they see the books in a new light after listening to other people’s comments at meetings.”

The selection of books for both clubs through December, with synopses, are listed below. It’s a compelling mix of fiction and non-fiction, from the Charles Blow memoir Fire in My Bones to The Remains of the Day by Kazuo Ishiguro. The chosen books are the result of voting by last season’s book club members, and copies of the books are usually available at the circulation desk. Additionally, some books may be available on the e-book service OverDrive and as audiobooks as well. (Check out the options by clicking here.)

The After-Dark Book Club Selections, September Through December
September 8: Everyone Brave Is Forgiven by Chris Cleave. This novel represents something of a departure for Cleave, whose earlier work has been centered in current events. This book is set in World War II and follows the intertwining paths of four characters as they navigate the war in London and Malta. According to a review by Hannah Beckerman in The Guardian, with Everyone Brave Is Forgiven Cleave cements his reputation as a skillful storyteller and a sensitive chronicler of the interplay between the political and the personal. As one character observes: “Who knows what takes more courage—to die in battle, or to live in vain? It cuts all of us in two, I suppose.”

October 6: No Great Mischief by Alistair MacLeod. The only novel written by this Canadian writer whose main medium was the short story, No Great Mischief debuted to rapturous reviews when it was first published in 2000. Set in a favorite MacLeod locale, Nova Scotia’s Cape Breton Island, it follows the MacDonald clan, who emigrated from Scotland in 1779. This book was enthusiastically recommended to the group by a book club member who said MacLeod was one of his favorite authors. “I don’t think there’s a lesson or issue here, as many of our books had this year, but it’s one of the most beautifully written books I’ve read in the past five years,” he said. “On that strength alone, I’d like to share it with the others in the group.”

November 3: The Invention of Wings by Sue Monk Kidd. This work of historical fiction, by the author of The Secret Life of Bees, pieces together the lives of the real-life Grimké sisters, leaders in the abolitionist and women’s rights movements, and a slave, Hetty, who was given to Sarah Grimké—much to her distaste—as a birthday present. When Sarah works to empower Hetty by teaching her to read, both are punished. In a review on NPR, Bobbi Dumas said: “The novel is a textured masterpiece, quietly yet powerfully poking our consciences and our consciousness.”

December 1: Fire Shut Up in My Bones: A Memoir by Charles M. Blow. Blow, a columnist for The New York Times, recounts his hardscrabble childhood growing up as the youngest of five sons in Gibsland, Louisiana. While Times readers may be well acquainted with how Blow’s life has turned out, reading some of his life’s harrowing details is still revealing, including the night he leaves his house with a handgun, intending to kill his cousin.

The 2nd-Friday Book Club Selections, September Through December
September 9: The Hare With Amber Eyes: A Family’s Century of Art and Loss by Edmund de Waal. This memoir by famed English ceramic artist Edmund de Waal takes him—and readers—back through the history of his family, the Ephrussis, who were leaders in the European grain industry for more than a century. Viktor Ephrussi, de Waal’s great-great-grandfather, was a patron of major artists and editor of the Gazette des Beaux Arts until the Nazis arrived, breaking apart the Jewish family and looting most of their art. All that remains are the netsuke, a collection of several hundred Japanese figurines—including a hare with amber eyes—that their maid hides in her mattress.

October 14: Gilead by Marilynne Robinson. Gilead spans three generations from the Civil War to the 20th century in this novel told from the perspective of the character John Ames, an aging Congregational minister in Gilead, Ohio. Taking the form of a diary that Ames is writing to his young son in anticipation of his own death, the novel is steeped in Robinson’s deep faith. Wrote James Wood in a New York Times book review: “Robinson’s book ends in characteristic fashion, with its feet planted firmly on the Iowa soil and its eyes fixed imploringly on heaven, as a dying man daily pictures Paradise but also learns how to prolong every day—to extend time, even on earth, into a serene imitation of eternity.”

November 11: My Name is Lucy Barton by Elizabeth Strout. Strout, who won the Pulitzer Prize for an earlier novel, Olive Kitteredge, writes about the complicated love between a mother and her daughter, Lucy, who grew up in a house deprived of many things, including emotion. The story is told years after, but in the context of, a weeks-long hospital stay when Lucy’s mother, from whom she had long been estranged, suddenly appeared at her bedside.

December 9: The Remains of the Day by Kazuo Ishiguro. This famous novel, which became further popularized when it was turned into a critically acclaimed movie in 1993, focuses on its narrator, an old-school English butler, James Stephens. Stephens, a man repressed by the traditions he so respects, grapples with the enormous cost of living a life in which propriety is revered above all else. Those costs include losing the love of his life and finally seeing his former boss, Nazi sympathizer Lord Darlington, for what he actually was. Yet given Stephens’ cluelessness about his very nature, The Remains of the Day is humorous and not just a study in melancholy.

In January, the Bookmark will focus on the book clubs’ selections though next June, but as these titles show, there’s already a great selection to help get you motivated to read and attend a book club meeting before 2017!

Library Notes
The Library will be closed on Monday, September 5, in honor of the Labor Day holiday.

The Library resumes longer Saturday hours on September 10, when it will once again be open on Saturdays from 10 a.m. to 4 p.m.

Novel Night Is Coming!
Invitations to Novel Night, the once-every-two year fundraiser, produced by The Friends of the Town of Pelham Public Library, will be in the mail to all Pelham residents within the next two weeks. The event is scheduled for Saturday, November 19.