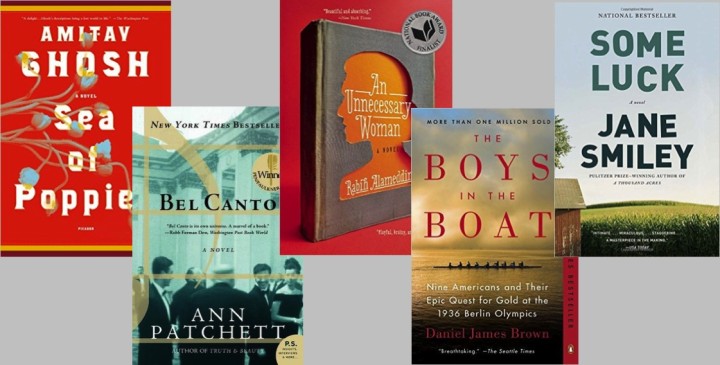 Bookmark: A Closeup of the Library’s New 2nd-Friday Book Club

If you’ve ever wanted to be part of the Town Library’s Book Club but couldn’t make it out of the house on Thursday nights to attend, there’s a wonderful new option: the “2nd-Friday” Book Club. True to the name, the new club meets on the second Friday of every month at the civilized time of 10:30am in the Library’s program room.

A second club had been talked about for several years, but it required a few things to fall into place, such as funding. That came by way of the gift to the Library in memory of Karin and Ted Mayer, which supports this club and other library programs. Another need was someone to facilitate it – choosing the books, doing research on each book to ensure a lively discussion, and, of course, moderating each meeting. The Library didn’t have to look far, selecting Carol Ipsen, a long-time resident who is also a member of what was rechristened the “After-Dark” Book Club once the second club came along. “The new Book Club fell into place so naturally it was clear that it was waiting to happen,” said Library director Tricia Perito.

Ms. Ipsen—a former journalist for Newsweek, among other publications,—is a true book club aficionado, currently belonging to a total of three. She caught the book-club bug some years ago, when her son was old enough and her career calm enough that she actually had time to read books. As a freelance writer, she recalls, “I was certainly reading a lot, but it was quick grabs of a magazine or research for an article.”

As facilitator of the 2nd-Friday Book Club, Ms. Ipsen aims to bring eclecticism to what the group reads. The Club’s first two books last fall, Ragtime and The Man Who Mistook His Wife for a Hat, were written by recently deceased New York authors who were very different: E.L. Doctorow and Oliver Sachs, respectively. The list through June—detailed below—includes fiction and non-fiction, and Ms. Ipsen says she also has plans in the future to introduce some classics. “They’re the kind of titles that people have always been meaning to read but never gotten around to it,” she said.

As with the After-Dark Book Club, the 2nd-Friday Book Club meets monthly from September to June with the exception of January. At the monthly meetings, participants may pick up the next month’s book for discussion at the Circulation Desk, and new members are welcome to join either Book Club at any time.

And now, without further ado, here are the 2nd-Friday Book Club selections through June, along with meeting dates:

February 12: Sea of Poppies by Amitav Ghosh (2008). This novel—the first of a trilogy completed last year—follows individuals involved in the slave trade from India in the 1800s. According to Gaiutra Bahadur in The New York Times Book Review, “Sea of Poppies is big and baggy, a self-styled epic with colossal themes and almost a dozen major characters, including the son of an American slave (who is passing as white), the orphaned daughter of a French botanist (who is passing as a coolie [an indentured Indian servant]) and an Anglophile raja (who has been wrongly sentenced to a penal colony on Mauritius).”

March 11: Bel Canto by Ann Patchett (2001). This novel’s intriguing plot revolves around opera diva Roxane Coss, the “bel canto” of the title, who is taken hostage by terrorists in a Latin American country while performing at the home of a local business man. Bel Canto follows what happens in the ensuing months when the terrorists’ plot unravels and life in the house takes on a different rhythm for both terrorists and hostages. Wrote Alex Clark in The Guardian, “Throughout, allusions to the future cleverly keep individual fates mysterious; we know there will be a ‘later’, but are denied the knowledge of who will live to see it.”

April 8: An Unnecessary Woman by Rabih Alameddine (2014). An Unnecessary Woman follows the story of Aaliya, a 72-year-old Lebanese woman in Beirut who spends her time mostly alone reading books and doing an annual translation into Arabic of a classic work. If that sounds dull, NPR’s Rosecrans Baldwin said otherwise: “Somehow there’s still room for sex, guns and Gustav Mahler. I can’t remember the last time I was so gripped simply by a novel’s voice. Alameddine makes it clear that a sheltered life is not necessarily a shuttered one. … It’s the drama of daily life, only highly informed.”

May 13: The Boys in the Boat by Daniel James Brown (2013). This popular work of non-fiction is about the 1936 eight-oar crew at the University of Washington, who—far from being the elites that dominated the sport on the east coast and Europe—are working class. They go on to compete in Hitler’s Berlin Olympics. According to GoodReads, “The Boys in the Boat is an irresistible story about beating the odds and finding hope in the most desperate of times—the improbable, intimate story of nine working-class boys from the American west who, in the depths of the Great Depression, showed the world what true grit really meant.”

June 10: Some Luck by Jane Smiley (2014). The first of a planned trilogy, Some Luck covers a generation growing up on an Iowa farm spanning the years from 1920 to 1953. According to Valerie Sayers, who reviewed the book in The Washington Post: “Over the course of the novel … most of the children will leave the farm just as surely as the rest of the white rural Midwest will pack its bags. Smiley delivers a straightforward, old-fashioned tale of rural family life in changing times. Her no-muss, no-fuss storytelling, if unsurprising, is also frequently subtle, wry and moving.”

Hope to see you at the Library on some second Friday!