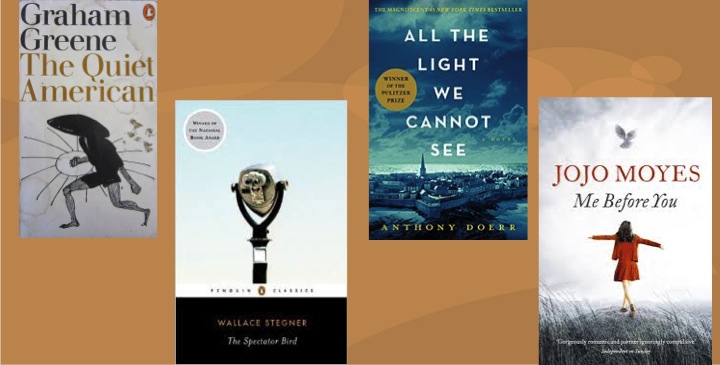 Bookmark: The Library’s After-Dark Book Club Is in Full Swing

Have you been toying with the idea of joining a Book Club but have been uncertain about the particulars—like occasionally hosting a crowd, or finding the time commitment of participating every month to be too much? If so, then the Pelham Library’s After-Dark Book Club may be just the thing for you. (The Library has also started a daytime “2nd-Friday” Book Club which meets on the second Friday of every month at 10:30 a.m. Click here for more details.)

The Library does the hosting, of course, and you can attend when it suits your schedule.

“I think it’s the perfect book club experience because all you have to do is show up having read the book,” said Margaret Young. Young, president of the Library’s Board of Trustees. She participated in the club for the first time this past year.

You’ll also have the added benefits of a diverse group of attendees, which adds to the discussion. “Diverse perspectives are always welcome and often provide remarkable insights that enhance your understanding and appreciation of an author’s intent,” said Jean O’Leary Gaffney, another Club member.

Attendance is usually around 12 to 18 people, and meetings are usually on the first Thursday of the month at 7:30pm.

The titles for the upcoming After-Dark Book Club season extends from September until June, with a break in January. This year’s list —as always, culled from suggestions by Club members, followed by a vote for the final nine—is wide-ranging. There are love stories, stories that take place against a backdrop of war, and a detailed account of the sinking of the Lusitania. There’s one book that was written last year, and one that was first published in 1955.

September: “All the Light We Cannot See” by Anthony Doerr. This Pulitzer Prize-winning novel, set in Germany and France during World War II, follows the lives of a blind French girl, Marie-Laure, and a German Boy, Werner, whose paths cross in occupied France. (While the Library does not usually solicit book donations, this is one title we would happily accept should you be looking to pass your copy along.)

October: “Me Before You” by JoJo Moyes. This immensely popular novel by British author JoJo Moyes explores what happens when two people who are stuck—in very different ways—come together. Will is an angry, wealthy—and now former—adventurer, left a quadriplegic following an accident; Louisa is a working-class girl who takes a job as Will’s personal assistant out of economic hardship.

November: “The Quiet American” by Graham Greene. The backdrop of this 1955 novel by veteran author Graham Greene is during the last days of French rule in Indochina. A murder mystery in part, this book examines the relationship between British correspondent Fowler and the quiet American, Pyle, who is described by Greene as “impregnably armored by his good intentions and his ignorance.”

December: “The Spectator Bird” by Wallace Stegner. This 1976 novel by a Pulitzer Prize-winning author, which takes place in the U.S. and post-World War II Europe, is set in motion when retired literary agent Joe Allston, living in California with his wife, Ruth, receives a postcard from Astrid, an old friend and Danish countess.

February: “We Are Not Ourselves” by Matthew Thomas. This 2014 novel follows the path of Eileen Tumulty, who grows up in Woodside, Queens, during the 1940s, yearning for the American Dream. When she marries Ed Leary, she hopes her dreams will be realized but discovers Ed doesn’t share her aspirations.

March: “Stoner” by John Williams. Written in 1965, this book was reissued two years ago when it was rediscovered by enthusiastic readers. The novel follows the life of William Stoner, born to a poor Missouri farming family, who ends up as an English literature professor. But the life he stakes out for himself doesn’t give him happiness and, according to the book recommendation site GoodReads, “Stoner rediscovers the stoic silence of his forebears and confronts an essential solitude.”

April: “Dead Wake: The Last Crossing of the Lusitania” by Erik Larson. This book by best-selling author Larson is about the tragic sinking of the Lusitania in 1915 by a German U-boat. It brings to life many of the characters involved in its story, including Boston bookseller Charles Lauriat, architect Theodate Pope and President Woodrow Wilson.

May: “Our Souls at Night” by Kent Haruf. This is the last book written by the late Kent Haruf. It takes place in the small town of Holt, Colorado. When Addie, a 70-year-old widow, asks if she can sleep with Louis, the husband of her late friend, their arrangement is met with disapproval. But together they discover “an emotional intimacy beyond anything either has previously known and both come to recognize that they ‘deserve to be happy,’ no matter what friends and family think,” according to Kirkus Reviews.

June: “The History of Love” by Nicole Krauss. This novel tells the story of octogenarian Leo Gursky, who survived World War II in hiding in Poland. Gursky still pines for his love from those days and for a manuscript that he’d written before he came to the U.S. that disappeared. What happened to both is revealed as the story is told.

The last day to sign up for the Summer Reading Game is this Friday, July 31. Pre-school children can sign up and get a book prize once they have listened to six stories. School-age children earn a free book upon reading three age-appropriate books.

Family Night at the Movies: Mondays, August 3, 10, 17; 7 p.m.
There are still three movie nights left this summer, so come by the cool Library to see a family favorite. Registration is not required. Movies and dates are below.

K-Day: Saturday, September 12, 1 p.m.
The annual rite of fall for kindergartners is back. Plan on coming to the Library after soccer to get your very own Library card. Face painting and animal balloons will add to the festivities!

(All Library programs are free and open to the public. To sign up for events that require pre-registration, call the Library at 914-738-1234. Out of courtesy to fellow attendees, please be on time.)

Adult Book Club: Thursday, September 10, 7:30 p.m.
The first book of the new season is the Pulitzer Prize-winning novel “All the Light We Cannot See” by Anthony Doerr. This Pulitzer Prize-winning novel, set in Germany and France during World War II, follows the lives of a blind French girl, Marie-Laure, and a German Boy, Werner, whose paths cross in occupied France. (While the Library does not usually solicit book donations, this is one title we would happily accept should you be looking to pass your copy along.)

One-to-One Computer and Device Instruction: Call the Library to make an appointment for individualized instruction in popular computer programs, such as Microsoft Word and Excel. You can also bring your smartphone or tablet to the Library and learn how to get started with apps that give library patrons access to free e-books, e-audiobooks, e-music and more.

Suspending Holds: This is a quick reminder to library patrons to suspend any holds you have on Library materials while you’re on vacation. It frees up materials for others and keeps your place in the queue. If you are unclear on how to suspend a hold, call the Library. A Library staff member will assist you.

(This story originally appeared on pelhamplus.com on Friday, July 31, 2015.)