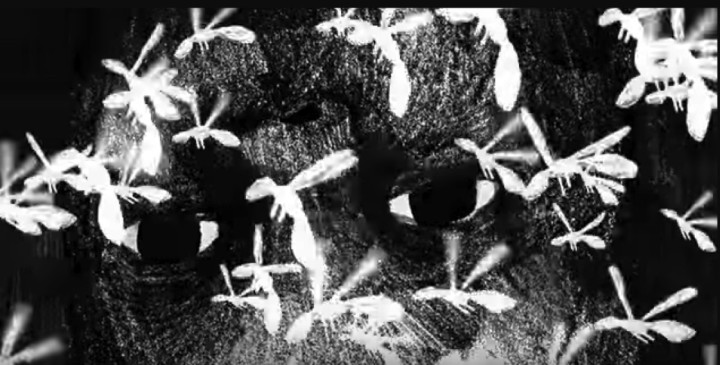 The first time Steve sees the white-winged wasps he is sure they are really angels. Not only do they look like ethereal creatures, they can also speak to him. They say, “We’ve come because of the baby. We’ve come to help. We can fix what’s wrong with the baby.” The theme of a sick baby and the promise of extraordinary helpers echoes David Almond’s haunting novel, Skellig. In Skellig the boy happens upon a wraith-like, owl-like, angelic figure, whose loose, feathery wings are similar to the beating white wings of the wasps.

And, yes, the new baby in The Nest needs help. He has so many things wrong with him —  including his heart, his eyes, and his brain. He may never talk, walk, or even feed himself. Steve’s parents go back to the hospital countless times, but never return with a positive diagnosis.

It is a bad summer for wasps. So bad, that one of the strange white ones stings Steve. He has an allergic reaction that requires medical attention. In fact, he goes home with an EpiPen in case he gets stung again.

Steve learns that the wasps will “fix” the baby by replacing him with a new, perfect child. The wasps are growing him in their nest. They need Steve’s consent and his help in putting the new baby into the crib. Steve says, “yes,” but then has second thoughts.

So much depends on Steve; watching the sick baby, possibly replacing him with a healthier one. Steve worries about wasps, his consent, and most of all, replacing his brother. Oppel asks probing questions about right and wrong, playing with fate, deciding who should live and who should die in this phantasmagorical story. It’s a heavy burden for a young boy, or for anyone, for that matter.