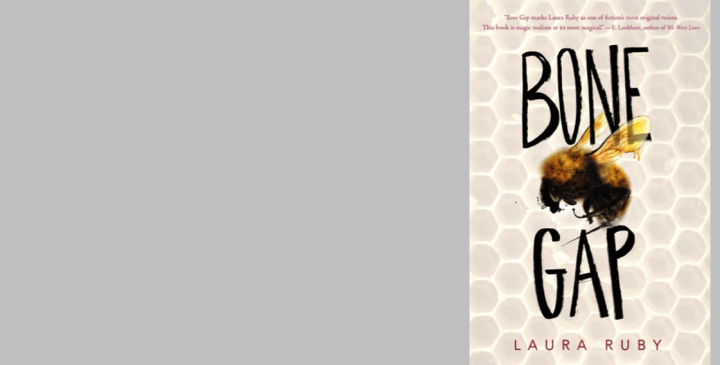 Corn fields. Farmers claim that you can hear the corn grow. And the corn does grow – tall and full –so thick that a person can appear or disappear between the rows. In the underpopulated town of Bone Gap, a beautiful girl from Poland appears in the empty barn of two young brothers, Sean and Finn. No one knows who she is or why she is there, and then just as mysteriously, she disappears.

But by the time she disappears, Sean, the older brother, has fallen in love with her and supposes that she has voluntarily run away. Finn, his teenaged younger brother, knows better because he was there when she disappeared — but he cannot explain exactly how it happened, nor can he identify the smooth talking, dangerous kidnapper. Because Sean gives up on getting Roza back, it is up to Finn to find her and bring her home.

Finn has also fallen in love. He loves Priscilla (“Petey”) Willis, the town bee keeper. As happens in many towns, she has an undeserved bad reputation and is deemed unattractive, to boot. The lifestyles of some of the residents undergo careful scrutiny for their unusual behaviors, like allowing chickens to live in their living rooms, but keeping their grandchildren out. Magical elements like castles complete with servants and a thoroughbred horse appear without warning. They add a phantasmagorical overlay to the story of Bone Gap. Readers will not be disappointed to find a tender love story amidst unscrupulous behavior and well-observed descriptions of country people living lives that contrast dramatically with those of modern suburban teens.