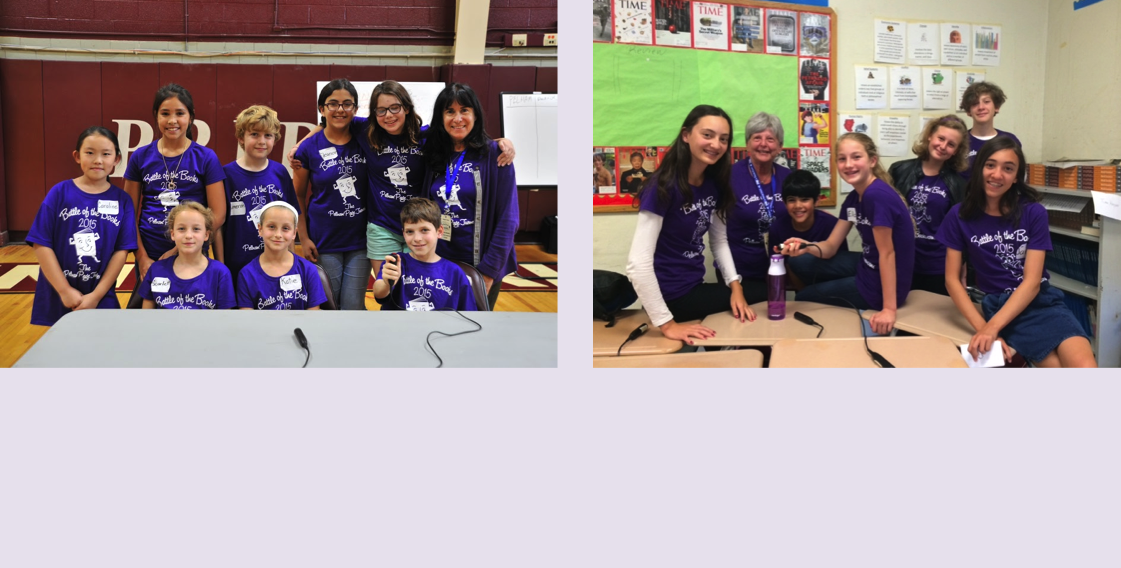 Bookmark: Two Pelham Teams Competed in Battle of the Books

Do you know how many walking sticks were in King Tut’s tomb? Or what Marie Antoinette’s last words were?

The answers are deep within the pages of  How They Croaked: The Awful Ends of the Awfully Famous by Georgia Bragg—and they were just two of the questions that were asked during the Battle of the Books, a competition using questions based on facts from books. The contest, which featured students from 16 libraries in the Westchester Library System, was held Oct. 17 at Ossining High School.

All told, 14 Pelham kids represented the Town of Pelham Public Library, not only competing in the all-day event but also reading the competition’s required books—both fiction and non-fiction—over the summer, re-reading them and practicing weekly at the Library long into the fall. Teams played between six and seven matches against other teams, with the two highest-scoring teams in each age group going to the finals.

“Reading is something you usually do alone,” said Augusta Turner, librarian for adult services, who again coached the grade 4 – 6 team, the Page Turners. “Battle of the Books is a unique way for kids to connect and collaborate with other young people who share a love of reading.”

The Page Turners, who came in third last year, made it to the final round, coming in second overall.

After fielding – or is the right term booking? – one team in the Battle of the Books last year, the Library added a second team, the grade 7 – 9 Pelham Bookworms, coached by children’s services librarian Lilly Hecker. The Bookworms almost made it to the semifinals in its first year of competing. Ms. Hecker, who attended the Battle of the Books for the first time, was impressed by what she encountered. “The energy, interest and excitement of the kids and coaches were overwhelming at the Battle event,” she said. “All the planning didn’t prepare me for the wonderful competitive drive of the kids. And to think it was all about books! Who knew?”

While it’s clear when talking to the students that they would love to win the competition one day, it’s also obvious how much they enjoyed the experience, no matter the outcome. “I thought it was great,” said Josh Handelman, a sixth grader at Pelham Middle School and Battle of the Books rookie. “The books were good, most of them, and our coach was really nice and the other kids were really nice.”

Seven of the eight kids who competed last year decided to do it again this year. Returning team members on the Page Turners were Katherine Alexander, Katie and Scarlett Bratone, Caroline Michailoff and Eleanor Moraes. Josh Handelman, Cameron Stanford and Caroline Wu were all new to the team.

The new Bookworms team included Eliza Bratone and Vikram Jallepalli, both of whom competed for the Page Turners last year, along with newcomers Madeline Bryce, Jamie Burke, Ashton Mallach and Alyssa Purcea.

The grade 4 – 6 team read Because of Mr. Terupt by Rob Buyea, Bud, Not Buddy by Christopher Paul Curtis, Cracker!: The Best Dog in Vietnam by Cynthia Kadohata, Escape from Mr. Lemoncello’s Library by Chris Grabenstein and Gregor the Overlander by Suzanne Collins.

The 7 – 9 team read Hold Me Closer, Necromancer by Lish McBride, How They Croaked; Legend by Marie Lu, Mrs. Peregrine’s Home for Peculiar Children by Ransom Riggs and Okay for Now by Gary D. Schmidt.

Kids joined the competition for a variety of reasons, ranging from being guided to it by a parent to hearing about it and wondering what it was all about. Pelham Memorial High School freshman Madeline Bryce, who goes to the Library every day after school, became intrigued about the Battle of the Books after seeing announcements about it. “There were a bunch of flyers at the Library and all over the website,” she said. “I thought it sounded really interesting.” She read each of the books numerous times, and even highlighted them for further study. “That was painful, highlighting books,” she said.

For the competitors, doing well wasn’t just about knowing the material but also about learning how to manage the buzzer and when to buzz in. “We would sit around a table at the Library, and we would have all the buzzers, like in the actual competition,” explained Jamie Burke, a seventh grader at Pelham Middle School.

Josh Handelman explained that being quick on the buzzer required trust in one’s teammates. “You didn’t have to know the answer [to buzz in],” he said. “You have to know that somebody else on the team knows the answer.” (The one who buzzed, however, had to be the one to tell the judges the answer.)

So were the teams nervous on competition day? Absolutely! Said Caroline Michailoff, a sixth grader at PMS: “There were butterflies in our stomachs. All of the parents were really supporting us. But it was all worth it.” Asked what her favorite moment of the competition was, she said, “It was probably just getting to the finals because it just felt so good.”

The Pelham teams were sponsored by a gift in memory of Karin and Ted Mayer. The Page Turners and Bookworms would like to thank Lina Palmer of T-Shirt Works, who printed team T-shirts and librarians Susan Kramer, Carlo Minchillo and Myles Roberts and PMHS senior Christopher Huang for volunteering their time and energy to help support the event. They would also like to thank Pelham Library Director Patricia Perito for her enthusiastic support of the teams and their coaches.

In case you’ve been wondering, here are the answers to the two pesky questions from the beginning of this story. King Tut’s tomb contained 139 walking sticks because he had trouble walking. Marie Antoinette’s last words were: “Pardon me, sir. I did not mean to do it.” She allegedly said that to apologize for stepping on the toe of her executioner.

Take the little one in your life to the Library’s Story Time for pre-schoolers. Attendance is limited to the first 40 people who sign in, caregivers included. Sign-up begins at 10:15 a.m.

Homework Help
Tuesdays and Thursdays, 3:30 – 4:45 p.m.
For children in grades 1 – 8, help with homework (not tutoring) is provided by Pelham Memorial High School students. Students must bring their assignments, textbooks and paper. Snacks will be provided.

All Library programs are free and open to the public. To sign up for events that require pre-registration, call the Library at 914-738-1234. Out of courtesy to fellow attendees, please be on time and remember to cancel if you have signed up and can’t make it so that someone else can have your seat.

After-Dark Book Club
Thursday, November 5, 7:30 p.m.
November’s selection is The Quiet American by Graham Greene. The backdrop of this 1955 novel is the last days of French rule in Indochina. A murder mystery in part, this book examines the relationship between British correspondent Fowler and the quiet American Pyle, who is described by Greene as “impregnably armored by his good intentions and his ignorance.”

Creative Aging Program “SOLOFire” Continues
Fridays, November 6, 13, 20 and Friday, December 4, 2 – 4 p.m.
For those who are already registered, there are four regular sessions left in this program. The performance that culminates this program will be on Saturday, December 12, from 2 to 4 p.m.

Second Friday Book Club Launches Next Month
Friday, November 13, 10:30 – 11:30 a.m.
Can’t make it out to the After-Dark Book Club on Thursday nights? There’s a new Book Club in town – it’s the Library’s daytime Second Friday Book Club, which — as its name implies — meets on the second Friday of the month. The November selection is The Man Who Mistook His Wife for a Hat by Oliver Sacks. In December, the Club will discuss Museum of Extraordinary Things by Alice Hoffman. Watch the website, e-newsletter and Bookmark for future titles.

One-to-One Computer and Device Instruction
Call the Library to make an appointment for individualized instruction in popular computer programs, such as Microsoft Word and Excel. You can also bring your smartphone or tablet to the Library and learn how to get started with apps that give library patrons access to free e-books, e-audiobooks, e-music and more.

The Second Friday Book Club and the Creative Aging Program are receiving funding from a gift in memory of Karin and Ted Mayer.

The Library will be open on Veteran’s Day, Wednesday, November 11. There will be activities for children all day long as part of “Pelham Reads Alice,” the community-wide celebration of Alice in Wonderland. For more Pelham Reads activities, check the Library website and the Pelhams PLUS.

This story originally appeared on PelhamPlus.com on Thursday, November 5, 2015.