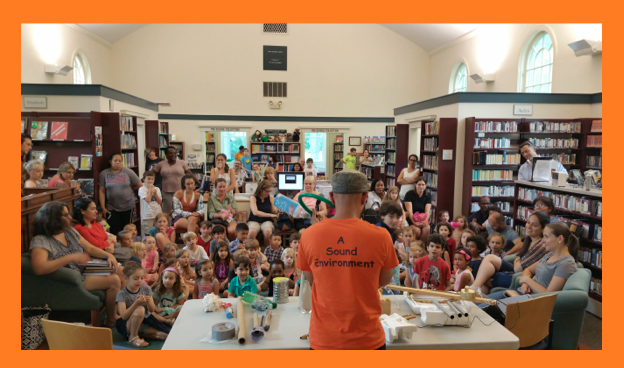 While schools and backpacks lie dormant in the summer, books do not – especially at the Library when the annual Summer Reading Program is in full swing and kids get to read for the sheer fun of it. As Children’s Services Librarian Lilly Hecker explains, “Reading is a year-round activity but in summer you get to do it outdoors!”

The Summer Reading Program has two parts: a game in which kids read books to earn book prizes from the Library, and a summer schedule packed with children’s programs. Read on to discover a summer full of Library fun!

Summer at the Library officially kicked off on the last day of school, with a musical performance by Bash the Trash. starting at 3:30 p.m.

Starting the next day, on June 24, kids can began to sign up for the Summer Reading Program; sign-up concludes on Saturday, July 29. Pre-school children can listen to five stories to select a book prize, and school-age children who read two age- appropriate books can select their own book prize. There are also additional prizes from the Library’s Treasure Chest, for children who read even more!

Kids who register for the Summer Reading Game are also invited to a make-your-own-sundae ice cream party on Thursday, August 24 at 3 p.m. Please register for this fun end-of-summer celebration by calling the Library.

The Library Is Where to Be on July Afternoons

This summer, the Library will have a particularly large number of engaging programs for kids, which, like all Library programs, are free. At 3 p.m. almost every weekday during July, something is happening, whether it’s a movie screening, a chance to make a sword or build a rocket, or to put together puzzles or play games.

Each of the four weeks of July programs has a theme. Please note that all summer programs – with the exception of the movies – require registration by calling the Library at (914) 738-1234. Those who can’t attend should call the Library, and cancel so that others can take their place. The full schedule is below.

Week 1 Theme: King Arthur
Monday, July 3: Listen to tales of King Arthur and the Knights of the Round Table, and draw your own round table and knights.
Tuesday, July 4: The Library is closed.
Wednesday, July 5: Make your own sword and shield or lady’s headdress.
Thursday, July 6: Act out the story of Arthur pulling his sword out of the stone.
Friday, July 7: Come participate in medieval games and tournaments.

Week 2 Theme: Space
Monday, July 10: Build a paper rocket and or make a pinwheel galaxy.
Tuesday, July 11: Learn about ions in space and then make a cloud mobile or pastel aurora.
Wednesday, July 12: Listen to books about space.
Thursday, July 13: A movie screening of Space Buddies. This 2009 Disney movie – part of the Air Buddies series – follows a pack of golden retrievers who fly to the moon!
Friday, July 14: Build your own planet with puppeteer Nicola Rose.

Story Time: All Summer Long
The Library’s popular Tuesday and Wednesday morning Story Time programs continue throughout the summer. Story Time for kids ages 3 – 5 is on Tuesdays; for kids ages 2 and under it’s on Wednesdays. Both sessions run from 10:30 – 11 a.m.

Caregivers must be in attendance and participate with the children they accompany. As such, the Library requests there be no phone use or talking during Story Time.

Bilingual Chinese-English Story Time also continues in the summer, and will be held every other Saturday morning from 10:30 – 11:15 a.m. Upcoming dates include May 20, June 3 and June 17. Check pelhamlibrary.org for the full summer schedule.

The last session of Spanish-English Story Time before a summer hiatus is Saturday, June 10 from 10:30 – 11:15 a.m. It is expected to resume in the fall.

The Summer Reading Program is generously funded by the Friends of the Town of Pelham Public Library, with the exception of the instrument-making workshop with Bash the Trash, the Build your own planet workshop with puppeteer Nicola Rose, and the Pirate Shop workshop with Engineering for Kids which are funded by a gift in memory of Karin and Ted Mayer.

See you at the Library this summer!

This story originally appeared on pelhamplus.com and in the News of Pelham.