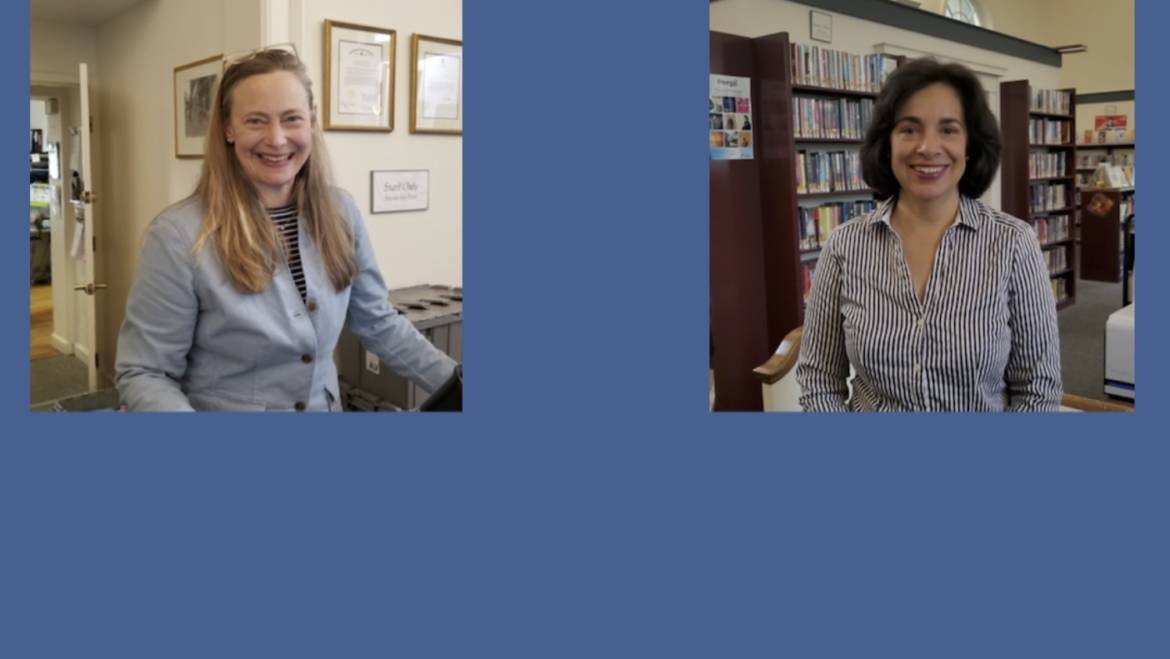 It takes a number of people – with responsibilities that are both on the front lines and behind the scenes — to make the operations of the Town of Pelham Public Library function. In Bookmark’s periodic “Meet the Staff” feature, we introduce newer people on the Library staff to the Pelham community.

This column focuses on clerk Ruth Konigsberg and bookkeeper Gail Vidales, both of whom joined the Library this year and had more than a passing association with the Library before they became employees.

A few years before Ruth Konigsberg made her first appearance behind the circulation desk as a substitute last summer, she could often be spotted at the Library, working on her 2011 book The Truth About Grief, which took a fresh look at the social science of bereavement and Elisabeth Kübler-Ross’ famous five stages of grief. The book – and ultimately her interest in pursuing a new career in libraries – grew out of her journalism career, where she held writing and editing jobs at New York Magazine, Glamour and Time, among others. At Time, she launched the website’s opinion section; her last full-time job in journalism was at Investopedia, which she left as managing editor earlier this year.

As the world of journalism has changed, particularly in the last decade or so, Konigsberg began to sense her values were becoming more aligned with the library world – where freedom of information, equal access, and a mission of literacy are paramount. Her feelings coincided with what was a good time in her life to shift focus. “I was at that point in my career where something in public service and serving my community made sense,” she said.

Konigsberg was appointed to her part-time position on the Library staff in June, but that isn’t the only way she’s pursuing her new career. She is also studying for her Masters in Library Science at Queens College, where she is working on earning a certificate in Children’s and YA services. In a blend of her previous and current careers, she has just written a review of several sequels of popular middle grades fiction series for The New York Times Book Review.

In addition to her interest in YA and middle grades fiction, Kongisberg enjoys post-apocalyptic novels for all ages. Station Eleven by Emily St. John Mandel is a favorite.

So how does the Library look from a different vantage point? “What surprised me is how much people use the Library for real world problems and not just recreational reading,” she said.

Gail Vidales: Bookkeeper
Most years, the Library holds an 8-part career development series, “Managing Your Career in Changing Times” which is led by the Westchester Library System’s WEBS career and education program. For Gail Vidales, the program’s goal — of helping attendees evaluate their skills and interests, and explore career alternatives – certainly worked. As she was attending the WEBS seminar at the Library early this year, and engaging in its focus on self-reflection, she heard about the part-time bookkeeper position that was opening up at the Library. “It was just that time in my life to have more time for other things,” she said.

Previous to her new part-time job at the Library, Vidales, a Mamaroneck resident who emigrated from Mexico to New Rochelle at age 9, had worked full-time as Director of Operations of the Community Resource Center. The non-profit serves thousands of immigrants in the area every year, focusing on their cultural, economic, educational, and professional integration into the larger community. It offers everything from education to legal services to advice on obtaining U.S. citizenship. She received her degree in Accounting and Business Administration from the College of Westchester.

In her new role, Vidales manages every aspect of the Library’s finances, from record-keeping, to preparing checks, payroll and, reports for board meetings and other stake holders.

Despite her expertise in finance, Vidales demonstrates that being a “numbers” person and enjoying books aren’t mutually exclusive. She is fan of historical fiction and biographies, and often asks fellow staff members Oz Coto-Chang and Augusta Turner for recommendations. She also loves the Library’s environment. “I like the stillness. I like the quiet environment and I love to work here.”

You never know where the Town of Pelham Public Library might take you.