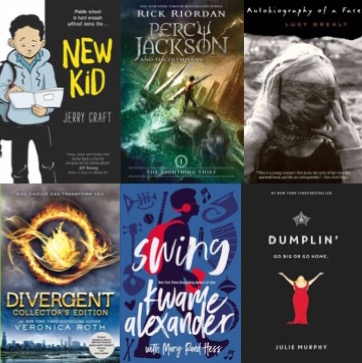 In order to ensure that all kids have access to summer reading during the Covid-19 pandemic, we have worked with the Pelham school teachers and librarians on book recommendations that are available with unlimited downloads and no waiting through Hoopla. That means that many kids can read the same book at the same time! What’s more, most of these are also available as audiobooks. All you need is a valid library card and your password (usually the last four digits of the phone number on the account.) For a new card or to renew an expired card, please email us at pelhamlibrary@wlsmail.org. (The library building remains closed to patrons although physical materials are available for circulation via curbside pickup services.) Below are several lists of popular, recommended books that are available immediately as eBooks and audiobooks.

The Strange Case of Origami Yoda by Tom Angleberger
Catch You Later, Traitor by Avi
Artemis Fowl by Eoin Colfer
The Ballad of Songbirds and Snakes (and all Hunger Games titles) by Suzanne Collins (audio only)
Walk Two Moons by Sharon Creech
The Graveyard Book by Neil Gaiman
In the Heart of the Sea by Nathaniel Philbrick (audio only)
The Lightning Thief by Rick Riordan
The Witch of Blackbird Pond by Elizabeth George Spear
The One and Only Ivan by Katherine Applegate (audio only)
Masterminds by Gordon Korman
New Kid by Jerry Craft
Other Words for Home by Jasmine Warga (audio only)
I am Number Four by Pitticus Lore
Michael Vey by Richard Paul Evans (audio only)
Divergent by Veronica Roth

With the Fire on High by Elizabeth Acevedo
Swing by Kwame Alexander
Fever 1793 by Laurie Halse Anderson (audio only)
Me and Earl and the Dying Girl by Jesse Andrews
The ABC Murders by Agatha Christie
Murder on the Orient Express by Agatha Christie
The Ballad of Songbirds and Snakes (and the Hunger Games series) by Suzanne Collins (audio only)
Chasing Lincoln’s Killer by James Swanson (audio only)
Divergent by Veronica Roth
Gone by Michael Grant
Squint by Chad Morris and Shelly Brown
Dumplin’ by Julie Murphy
Loving vs. Virginia by Patricia Hruby Powell
An Acquaintance with Darkness by Ann Rinaldi
Carve the Mark by Veronica Roth
Smiles to Go by Jerry Spinelli
Inside Out and Back Again by Lai Thanhha
Top Prospect by Paul Volponi
April Morning by Howard Fast
Life as We Knew It by Susan Beth Pfeffer
The Secret Language of Sisters by Luanne Rice (audio only)
Never Fall Down by Patricia McCormick (audio only)
House Arrest by K.A. Holt

12th Grade AP English
How to Read Literature Like a Professor by Thomas C. Foster (required)
The Bean Trees by Barbara Kingsolver (required)

The below titles are suggestions for AP English that are all available on Hoopla:

A Delicate Balance and Seascape by Edward Albee
How the Garcia Girls Lost Their Accents; In the Time of Butterflies; In the Name of Salome, by Julia Alvarez
A Golden Age by Tahmima Anam
Bleak House; Nicholas Nickleby by Charles Dickens
Crime and Punishment; The Brothers Karamazov by Fyodor Dostoyesvsky
Silas Marner; Adam Bebe by George Eliot
The Last Report on Miracles at Little No Horse; The Master Butchers Singing Club; Four Souls; The Painted Drum; The Plague of Doves by Louise Erdrich
A Passage to India; A Room with a View by E.M. Foster
Cold Mountain by James Frazier
The Power and the Glory by Graham Greene
The Book of Ruth by Jane Hamilton
Jude the Obscure; The Return of the Native by Thomas Hardy
The Blithedale Romance; The House of the Seven Gables by Nathaniel Hawthorne
A Doll’s House; The Master Builder by Henrik Ibsen
The Cider House Rules; A Prayer for Owen Meany, by John Irving
Portrait of a Lady by Henry James
Dubliners by James Joyce
The Poisonwood Bible; The Prodigal Summer by Barbara Kingsolver
The Namesake by Jhumpa Lahiri
Sons and Lovers; The Rainbow, by D.H. Lawrence
In the Fall by Jeffrey Lent
The Grandmothers by Doris Lessing
Death in Venice by Thomas Mann
Ahab’s Wife or the Star Gazer; Four Spirits, by Sena Jeter Naslund
Halfway House by Katherine Noel
Pygmalion; Saint Joan; Man and Superman by George B. Shaw
Arcardia by Tom Stoppard
Anna Karenina by Leo Tolstoy
The Street of a Thousand Blossoms by Gail Tsukiyama
Possessing the Secret of Joy; Temple of My Familiar by Alice Walker
The Age of Innocence; The House of Mirth by Edith Wharton
An Ideal Husband by Oscar Wilde
To The Lighthouse; Mrs. Dalloway by Virginia Woolf