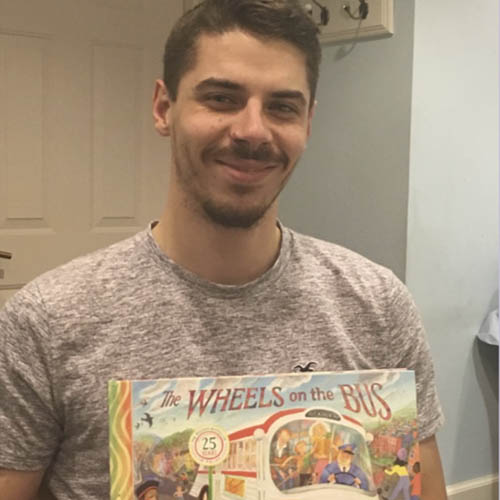 Starting in December, the Library had extra help with a French accent for a few months. That’s when visiting Pelham resident Quentin Lefour took on a range of volunteering responsibilities, in an arrangement that was positive pour tous. He returned to his native France in February.

For Quentin, working at the Library was an opportunity to build on his English skills as he pursued his baccalaureate degree; for the Library staff, it was a pleasure having some extra help, and for some Library patrons, it was a chance to learn a little French, as he ran several sessions of French-English Story Time in January.

Quentin came to Pelham for two reasons. His parents currently live here because of his father’s work at the French Mission of the United Nations. Also, as part of being on the English track with his studies – that is, taking courses in English rather than French – he was required to spend at least six to nine months in another country. During his two years here, Quentin took courses at BMCC (Borough of Manhattan Community College). He said of his experience: “I was very happy to do it because you open your mind to a different culture.”

Oz Coto-Chang says the volunteer stint was mutually beneficial. “Quentin not only helped with Homework Help, which was his original intention, but was equally happy to help us organize the collection for the online catalog migration, which happened in March.”

So, what were the opportunities and challenges of his work at the Library? When it came to the homework program, Quentin said he confronted not only the challenge of expressing math concepts in English, but also the conundrum many parents have faced – that the way he’d learned math was different from how it’s being taught now. “I didn’t want to confuse the students with the way I learned it,” he said.

He also found that the best way to handle French-English Story Time was to translate English books into French rather than going straight to some more difficult French texts. Thus, The Wheels on the Bus became Les Roues de L’Autobus under Quentin’s watch.

While France is where Quentin grew up, his father’s career has meant that no one city is “home” – he has lived in Dijon, Verdun, Lyon and Paris, and when he returned to France last month it was to yet another city – La Rochelle — where he is studying for a Masters in International Business at La Rochelle Université. (Interestingly enough, La Rochelle was the hometown of the original group of French Protestant refugees known as Huguenots, who purchased 6,000 acres to form New Rochelle in 1689 from John Pell. Pell, also known as the Second Lord of the Manor of Pelham, had inherited the land from his uncle, Thomas Pell, the founder of Pelham.)

Quentin made the most of his time in the U.S., traveling frequently into New York, and also marveling at the huge contrasts between American cities and rural areas. A trip to Las Vegas was a particular highlight because of the way it emphasizes this mix, going from a landscape of “practically nothing” to a bustling American city. “You have to do this at least once in your life,” he said.

The Library staff – and the patrons who met him – wish Quentin well in his endeavors. Au revoir!