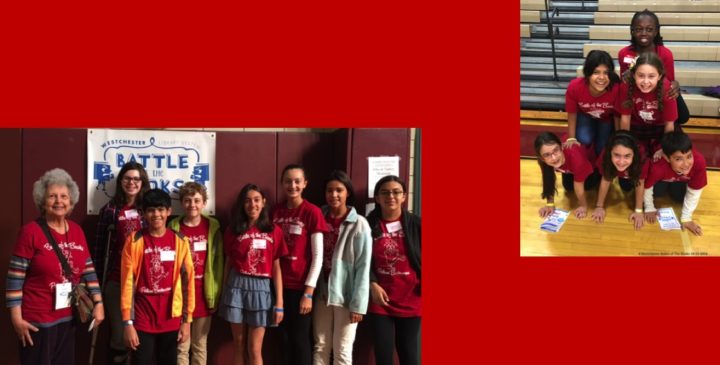 Bookmark: Library Teams Make Pelham Proud in the Battle of the Books

On Saturday, October 15, teens and children representing the Town of Pelham Public Library once again competed in the Battle of the Books. The competition, now in its third year, pitted Pelham’s two teams — the Pelham Page Turners and the Pelham Bookworms – against teams from other member libraries in the Westchester Library System during a full day of head-to-head competition at Ossining High School. All told, nearly 250 young people representing 16 public libraries participated in this event. The Bookmark is pleased to report that both teams did extremely well in their respective divisions.

Every second we’ve worked for came down to this one moment. And by far it was worth it… the Pelham Bookworms competed in the third annual Battle of the Books. During the competition, teams from throughout Westchester read assigned books and come together to answer questions about them. Whichever team buzzes in fastest with the correct answer is awarded points.

The Bookworms, which competed in the grades 7 -10 bracket, consisted of Kathryn Alexander, Madeline Bryce, Vikram Jallepalli, Caroline Michailoff, Eleanor Moraes, Cameron Stanford and me. The books assigned to us were: Life as We Knew it by Susan Beth Pfeiffer, Every Day by David Levithan, Dead End in Norvelt by Jack Gantos, Counting by 7s by Holly Goldberg Sloan and Under a Painted Sky by Stacey Lee.

Since I’ve competed in Battle of the Books before, I know that the competitions are intense! You get very anxious in those few moments before the contest starts. When I asked Shana Schoepke, Cameron’s mother, how she felt, she said, “It’s a lot more exciting than I thought it would be! You would think a reading competition would be quiet and boring but it’s just the opposite – fast-paced and exciting!” ­­

My favorite part was the competition. The adrenaline and pressure of pressing the buzzer first is so thrilling! When my team found out we were in the semi-finals we exploded with excitement!!!

Preparing for the competition is the hardest part. You have to read the books multiple times and retain even the tiniest facts. I asked my teammate Vikram, “What made you join Battle of the Books?” He told me, “I did it the past two years and thought it was fun and challenging. When I first heard they were doing this I thought I might be the right person to help Pelham win!”

Of course we Bookworms could not have made it so far in the competition without our coach Lilly Hecker, who is the children’s services librarian at the Library. She and Ms. Turner — who coaches the younger Pelham team — run practices to prepare us. I asked Ms. Hecker, “Why did you decide to join Battle of the Books?” She told me, “I wanted a fun experience for the teams and I see they really enjoy working together. I also bring chocolate chip cookies to the practice to encourage them to work harder!”

As with the younger team, one of the strategies our team used was to have an “expert” for each book, who was in charge of learning every detail. My teammate Kathryn told me, “My favorite book was Counting by 7s because I read it many times before — so, when I saw it was one of the books for the competition, I got really excited!”

At the end of the first six rounds, the Pelham Bookworms were in a four-way tie to go to the semi-finals. We were asked five questions to break a four-way tie! It was sudden death. We learned a lot. We worked really hard for this competition and it was worth it.

The Pelham Page Turners: Right Down to the Buzzer

The Pelham Page Turners had practices Monday and Thursday starting September 8 and then came the day when it all matters: The Battle of The Books competition! The Pelham Page Turners worked so hard, ready and studying seven days a week with the help of our fabulous coach Augusta Turner, who is the adult services librarian at the Library.

The Page Turners, which were made up of Pelham kids in the fifth and sixth grades, included six players: Gabby Ahitow, Irene Basu, Lise Obudulu, Clare Pachuta, Madeline Simon and me.

All of the players were amazing. We each had a book to study the hardest. Mine was Crispin: The Cross of Lead by Avi, Lise got Rules by Cynthia Lord, Gabby and Madeline had Blizzard! The Storm That Changed America by Jim Murphy, and Irene and Clare got Gods of Manhattan by Scott Mebus. All of us were experts on The Fourteenth Goldfish by Jennifer L. Holm. Given the fact that our team had one sixth grader and five fifth graders, I think we were pretty good.

Once you get in the room and the round starts, your heart is racing and you are anxious. The team won five out of six rounds and ended up getting first with 90 points going into the semi-finals.  I asked, my sister, Caroline, who is on the older team: “What was your favorite part about the competition?” She replied: “Being able to buzz in and get the question correct was a good feeling for you and your team. When you get it wrong, it is the opposite feeling.”

Then, we were in the semi-finals against the Bedford library team, and it was 10-10 and there was a tiebreaker question. All the judge said before the boy on the other team buzzed in was, “Which gate … “ and the boy answered correctly that it was the Bishop’s Gate from Crispin: The Cross of Lead. Bedford went on to the finals and lost to Rye. We were sad we didn’t win, but we were proud of ourselves. We got 100 points during a total of seven, 25-question rounds.

My absolute favorite part was buzzing in and the intensity. I’m a really fast buzzer so I love buzzing. I will buzz early and confer with my teammates and most of the time we will get it correct. I’m very much looking forward to next year’s competition.

Ms. Turner asked everyone, “Did you have fun?” and all of us replied, “Yes”! Lise, Irene, Madeline, Gabby and I will still be Page Turners if we choose to continue next year. We will be saying goodbye to Clare, who will be too old for the Page Turners, and hello to some current fourth graders. I think all of the team members have agreed we will look forward to next year’s competition.