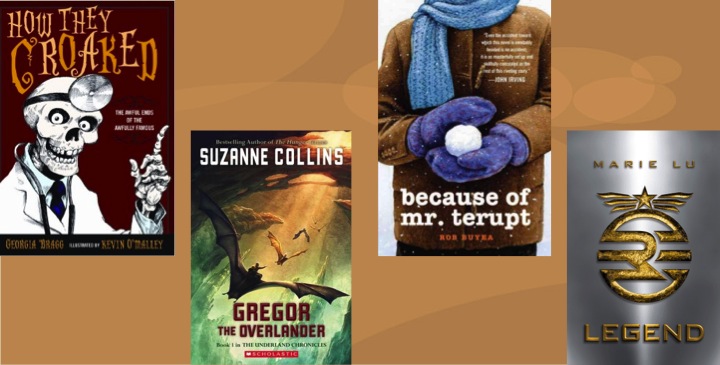 Like These Books? Then Join the Battle of the Books!

Love to read some of the books above, and more? Like to play “Jeopardy?”

Even though the Battle isn’t until next October, the time to sign up is now! The first informational meeting is on Monday, May 11 at 6 p.m., and participants will read five books – that they will be quizzed on during the Battle – over the summer. For more information on how the Battle of the Books works, read on:

What is the Battle of the Books?

The Battle of the Books is a countywide competition of young adults from participating Westchester County public libraries. Teams will compete by answering trivia questions based on five specific books in a format similar to “Jeopardy.”

How Many Students Are Needed to Make a Team?

The maximum number of team members allowed to participate in a round during the Battle is five. Depending on interest, we may have larger teams and rotate the members participating in the different rounds.

What Books Will Participants Need to Read?
Book selections include fiction and non-fiction in many genres. Students must read all five books over the summer. Team members in grades 4 – 6 will read Because of Mr. Terupt, Gregor the Overlander, Cracker! The Best Dog in Vietnam, Mr. Limoncello’s Library and Bud, Not Buddy. Team members in grades 6 – 9 will read How They Croaked, Legend, Miss Peregrine’s Home for Peculiar Children, Okay for Now and Hold Me Closer, Necromancer. (Sixth graders will be placed on either team, depending on where they are most needed.)

Why Participate in the Battle of the Books?
It’s fun! You’ll get to meet kids who love to read as much as you do! There is prestige and prizes! The winning teams’ libraries will get trophies to display until the next battle. The top three teams will receive prizes and all participating students will receive a certificate!

What Is the Time Commitment?
In addition to reading all five books, team members are required to attend several early evening practice meetings in September and October.

When Is the Battle?
It’s on Saturday, October 17, 2015. Times and location to be announced.

How Can You Sign Up?
Contact librarians Lilly Hecker (lhecker@wlsmail.org) or Augusta Turner (aturner@wlsmail.org), or call them at (914) 738-1234, and come to the informational meeting at the Pelham Library on Monday, May 11, from 6 to 7pm.