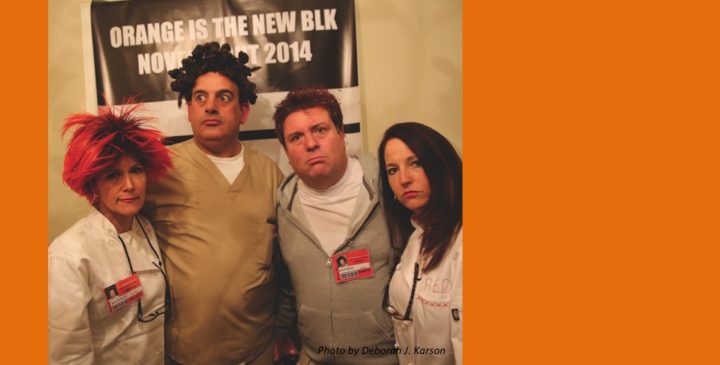 Bookmark: As Novel Night Approaches, How Past Dinner Hosts Brought Books to Life

Every two years in the fall, Pelham is blanketed with something in addition to falling leaves: invitations to Novel Night, the biennial fundraiser by the Friends of the Town of Pelham Public Library. This year, Novel Night will be held on Saturday, November 19.

It’s unusual among benefit events because its centerpiece is more than two dozen separate dinners around Pelham, each themed around a different book. This year’s menu of 28 dinners includes: Alexander Hamilton, Dead Wake: The Last Crossing of the Lusitania, Please Kill Me: The Uncensored Oral History of Punk and Ragtime.

For those thinking of going, the invitation sets the mind racing. How does one host a dinner around the theme of a sinking ocean liner? Will the dinner centered on Alexander Hamilton more resemble the book or the Broadway musical? Will the people hosting the Please Kill Me dinner have a vinyl copy of Never Mind the Bollocks — or should I bring mine?

The creativity poured into Novel Night dinners is the stuff of local lore, so for this Bookmark, we talked to past hosts about why they selected the books they did—and how they brought those books to life.

(By the way, if you’re planning on attending a dinner, you must RSVP by Saturday, October 1, though tickets to the raffle and after-party at the New York Athletic Club will remain on sale, even on-site. Visit pelhamnovelnight.com for details.)

At the very least, one would think that hosting a dinner would require furniture, but that’s not necessarily the case. In fact, for Maryann Pfeiffer and Richard Ellenbogen, who have hosted Novel Night dinners at their home four times, it became the driving force behind their first dinner, Phantom of the Opera in 2006, which they hosted with Catherine and Bill Taubner. Having recently moved into their home, they didn’t have a lot of living room furniture, which made it the perfect space to turn into a large banquet hall. The room also had just the right accoutrements: a motorized chandelier, and a balcony where a hired phantom of the opera roamed about.

Once they had the official guest list from the Novel Night committee (attendees name three choices and are assigned dinners on a first-come, first-serve basis), Pfeiffer and Ellenbogen sent each guest “tickets” to the opera.

For other Novel Night hosts, it’s the venue that leads to the book selection. That was the case with 2014’s Right Ho, Jeeves dinner, held in the home of Friends’ treasurer Anthea Perkinson and her husband, Shaun Gurl, and co-hosted with two other couples: Mary Callahan and Phil Corbett, and Anne Field and Geoff Lewis. Field, a co-president of the Friends, explained, “We knew we were holding the dinner at Anthea’s, which is a big house that feels very British country-style. So, Right Ho, Jeeves, about a British upper-class twit and his brilliant butler, seemed to be a good fit for the house.”

The hosts infused the house with subtle British and period touches. A Union Jack flew over the front door, and Cole Porter music seemed to come from a 1930s radio (though the player was actually hidden behind it). A top hat and walking stick were perched by the door, and portraits of members of the royal family were also placed about the house. The food, featuring British staples, was mostly cooked by Perkinson, though a few British specialties, such as meat pies, were “imported” from Manhattan.

Bridging Two Locales—in One House
Just as books often shift location, the dinners sometimes do, too. The hurdle for hosts is portraying a change in scene all under the same roof. Pfeiffer and Ellenbogen, who hosted The Lion, The Witch and the Wardrobe with the Taubners in 2008, transported their guests to Narnia (actually their dining room) by having them enter and exit a wardrobe. The wintertime Narnia was created in part with a machine—built by Ellenbogen, a one-time president of the Library’s board—that spouted fake snow. “My husband goes a little bit crazy, to say the least,” said Pfeiffer, herself a former Board Member of the Friends.

The hosts of 2014’s Orange Is the New Black—Indrani Franchini and her friend Stacey Gaine— faced the same challenge. The book tells the true story of a Smith College alum’s prison term, but they didn’t want the dinner to take place entirely behind bars. Appetizers were served in an elegant “pre-arrest” area, and the entrance hall was “admissions,” where guests were fingerprinted and had mug shots taken. After going behind bars—built by a handyman—guests entered the family room, now a “prison” with no rug, a cafeteria-style table and folding chairs. They also served prison food, of a sort: macaroni and cheese—with lobster.

Franchini and Gaine picked the book after both read it one summer and liking it better than the Netflix series. They also loved that the theme provided a chance to dress down. “It was anti-fancy,” recalls Gaine. “I thought people would really like it, and they did.”

The shift from fab to drab—though in reverse—also took place at the 2012 Hunger Games dinner hosted by Sharene Jones (the co-chair of Novel Night this year and in 2014) and Kristin van Ogtrop. “We chose The Hunger Games in part because we both had kids in high school and Hunger Games fever had certainly captured them,” van Ogtrop explains. The teens ended up being servers at the dinner.

“We wanted to pick a book that was exciting and wonderful at that time,” adds Jones.

Appetizers and drinks, offered in tin cups and mason jars, were served in “District 12,” an Appalachian-like region in the book. To create a hardscrabble look, van Ogtrop’s living room walls were covered in burlap.

Then, after Jones handed out lottery tickets—in a spoof on picking Hunger Games “tributes”—guests were ushered into a banquet worthy of the book’s over-the-top Capitol (yes, Capitol), a place where everything is amplified. Among the flourishes were massive, fake bouquets of flowers. Van Ogtrop had seen them in the window display of an Anthropologie store she passed every day in Manhattan and found a way to borrow them.

A Night for Everyone
Recounting the details of a few Novel Night dinners can never portray their full range. By design, the dinners are big and small, elegant and down-to-earth, home-cooked and catered, buffet and sit-down. Some people love to dress to the theme; others don’t. And some simply come to the after-party, which is a great opportunity to see friends and neighbors and be a part of the event.

As always, the Library thanks the Friends for putting on Novel Night – particularly co-chairs Sharene Jones and Judy Shampanier and Deborah Winstead, who has been in charge of business outreach. Proceeds from Novel Night fund many programs at the Library.

This article first appeared in News of Pelham on September 28, 2016 and also appeared in pelhamplus.com.

“Orange Is the New Black” photo by Deborah J. Karson.