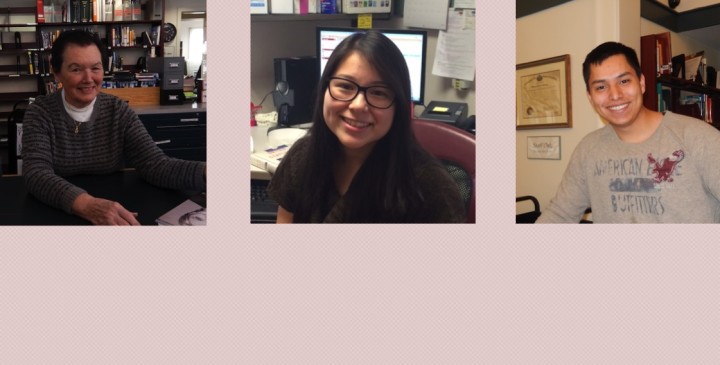 In last month’s Bookmark, we debuted a series about the Library staff: How they came to the Town of Pelham Public Library, and what they enjoy about their jobs.

Now it’s time for round two.

As with the first in the series – which told the stories of Director Patricia Perito, Adult Services Librarian Augusta Turner and Children’s Service Librarian Lilly Hecker – the next set of Library staffers the Bookmark is profiling have unusual and disparate stories to tell about how they came to the Library. In this edition, we’ll hear about library clerks Carolina Coto-Chang, Adrian Coto-Chang and Judy Hellmann.

Also, check out the children’s programs below during the week of spring break.

A Family Tradition: Working at the Pelham Public Library

When Carolina Coto-Chang says she’s been working at the Library for eight years, it doesn’t seem possible, unless she started working there as a toddler. But as a member of Pelham’s Coto-Chang family, which is originally from Guatemala, the Pelham Library runs in the family. All of her siblings – three brothers and a sister – have worked at the Library at some point. Brother Adrian (see below) is still a library clerk, while Ozzy, Marco and Mirna have gone on to other things.

In fact, Carolina Coto-Chang accompanied big sister Mirna years ago on her interview, and soon after – too young to get a paying job – she began volunteering. Her first paid position at the Library came at the age of 14, as a page doing shelving and keeping track of the books. These days, her work as a clerk means she does a number of things to keep the collection organized and in good shape, labeling and processing books and even mending them, in addition to working on the circulation desk.

Working at the Library is but one component of a very busy life. She also serves as a nursery school teacher in Greenwich while pursuing a Masters in early childhood education at Iona College, which she also attended as an undergraduate. (She’s also a graduate of Pelham Memorial High School.) She explains, “I’m good at balancing jobs and organizing my life.”

When she’s not busy juggling all these responsibilities, she likes to read mysteries and thrillers – books that offer suspense.

Adrian Coto-Chang took a path very much like his younger sister’s but at a slightly earlier age. Like Carolina, he volunteered at the Library at a young age, then became a page. His main role was to help patrons find what they were looking for. “It can be overwhelming at first walking into the Library,” he says. Coto-Chang also described himself back then as being a “wandering cart man,” putting books back on the shelves.

When he was 18, a part-time clerk’s job opened up. He applied for the position and got it. As he was being interviewed by Bookmark a few days ago, he was putting screens in windows on the first truly warm spring day, but, generally speaking, he said that being a clerk expanded his interactions with the public. As such, he is on a first-name basis with many library patrons.

He and the other clerks are also key team members at some of the Library’s biggest functions, such as the annual K-Day, the September Saturday when kindergartners get their library cards. “Seeing these kids grow up that I’ve known since they were an elementary school has been a very rewarding experience,” he says.

After graduating from PMHS, Coto-Chang received an Associates degree from Westchester Community College and recently completed his Bachelor’s in Police Studies at John Jay College. Whatever his future path, one thing is for sure: it will be much different than helping people find books.

A Second Career, and a New Set of Friends

For clerk Judy Hellmann, who started as a substitute ten years ago, securing a part-time job at the Library was the perfect antidote to full-on retirement. When she applied, “I had retired from my full-time job a few years back,” she says. Hellmann had several careers before coming to the Library. After graduating from St. John’s University with a Bachelor’s of Science in education, she became a teacher at St. Mary Star of the Sea on City Island and also supervised computer instruction at American Martyrs School in Bayside, Queens. Eventually, she left teaching to becoming an executive secretary with the bank HSBC in New York.

Ms. Hellmann, who now lives in Hartsdale, loves interacting with people and also relishes the Pelham friendships she’s made during her second career. “A lot of seniors who come here, they think of me as a friend, and I think of them as friends as well,” she says.

She is also inspired by what she sees among the Library’s younger visitors. “I’m happy to see the young people as interested in the books as they are,” she says.

One of her favorite books is “A Week in Winter” by the late Irish novelist Maeve Binchy.

Start off spring break by coming to the Library for a free afternoon screening of the family movie “Shaun the Sheep.” From the creators of Wallace & Gromit, it follows what happens when Shaun takes the day off and has enough adventures – involving a farmer, a caravan and a steep hill – to make him most interested in returning home. Registration is not required.

If your children never tire of building things with LEGOs, they are not alone. To get their LEGO love out, come to the Library for a 90-minute open session of creating with this classic toy. The Library even provides the LEGOs! Other board games will also be available. Registration is not required; this program is open to ages five and up.

Central Park Zoo Brings  Rainforest to Library: Thursday, March 24, 2:30 p.m.
The Central Park Zoo returns to the Library during spring break for this program about the rainforest. It’s a chance for children to learn about the layers of the rainforest, habitat geography and animals that reside in each habitat. For grades K – 3. Registration is required.

Chess Instruction Returns: Mondays, April 18, 25; May 2, 16, 23, 7 – 7:45 p.m.
The Library is once again offering free chess instruction, taught by John Gallagher. The series is for ages five and up – including adults — and people of all abilities. Registration is required.

Homework Help: Tuesdays and Thursdays, 3:30 – 4:45 p.m.
For children in grades K – 8. Students must bring their written assignments and accompanying textbooks, and they are free to drop in and leave when they’ve completed their assignments. Different high schoolers help out, depending on the day. Homework Help is also a good opportunity for beginning readers to read aloud to an interested teen. Snacks are provided. (There will be no Homework Help during the week of spring break.)

WEBS Career Development Series, “Managing Your Career in Changing Times”: Tuesdays, March 15, 22 and 29; April 5, 12 and 19, 6:30 – 8:30 p.m.
The next meeting for registrants in this popular series is next Tuesday, March 15. From WEBS, a service of the Westchester Library System, it teaches attendees how to evaluate their skills, interests and personality; use online career information; explore career alternatives; find out about educational and training programs in Westchester; and learn effective job-seeking strategies. No walk-ins are allowed.

After-Dark Book Club: Thursday, April 7, 7:30 p.m.
The Club will discuss The History of Love by Nicole Krauss. This novel tells the story of octogenarian Leo Gursky, who survived World War II in hiding in Poland. He still pines for his love from those days and for a manuscript that he’d written before he came to the U.S. that disappeared. What happened to both is revealed as this multi-layered story is told. (Note: This was originally the June selection.)

2nd-Friday Book Club: Friday, April 8, 10:30 a.m.
In April, the 2nd-Friday Book Club will discuss An Unnecessary Woman by Rabih Alameddine. This novel centers on Aaliyah, a 72-year-old Lebanese woman in Beirut who spends her time mostly alone reading books and doing an annual translation into Arabic of a classic work. If that sounds dull, NPR’s Rosecrans Baldwin said otherwise: “Somehow there’s still room for sex, guns and Gustav Mahler. I can’t remember the last time I was so gripped simply by a novel’s voice. Alameddine makes it clear that a sheltered life is not necessarily a shuttered one. … It’s the drama of daily life, only highly informed.”

All Library programs are free and open to the public. Unless otherwise noted, you can sign up for events that require pre-registration by calling the Library at 914-738-1234. Out of courtesy to fellow attendees, please be on time, and if you can’t come, call to cancel so that someone else can have your seat.

The 2nd-Friday Book Club and the WEBS Career Development program are funded by a gift in memory of Karin and Ted Mayer. WEBS also received support from the New York State Library and the Westchester County Government. The Chess and Central Park Zoo programs are funded by the Friends of the Town of Pelham Public Library. Story Time is made possible during the school year by the Library Partners Program of the Junior League of Pelham.

This article originally appeared on pelhamplus.com on March 16, 2016.