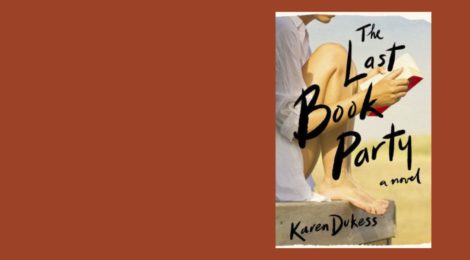 On the evening of Tuesday, July 9 at 7 p.m., long-time Pelham resident Karen Dukess will hold a public book signing and event for her first novel, The Last Book Party. Published by Henry Holt, the novel officially launches on the day of this event and it will include a Q&A with Dukess conducted by her editor at Henry Holt, Libby Burton. The novel, which is on a number of recommended lists including Barnes & Noble’s “Discover Great New Writers,” takes place on Cape Cod in the summer of 1987 and focuses on Eve Rosen, an aspiring writer, who takes an assistant’s job with an acclaimed New Yorker writer.

According to Stephanie Clifford, author of Everybody Rise, “Laced with the light of its Cape Cod setting, The Last Book Party details a 1980s summer among the literary set that has far-flung consequences for all its characters. As much as the book focuses on love affairs between people, readers will leave inspired by the real love affair here: between Karen Dukess and the world of reading and writing that she illuminates.”

For Dukess, The Last Book Party is the fulfillment of a lifelong dream to write fiction, though her career previous to the novel centered on writing as well, including stints as a reporter and editor for The Moscow Times and at the United Nations. The beginnings of the novel started eight years ago when Dukess joined a writing group and began on a memoir – she has spent many summers in Truro – that “totally became something fictional.” She continues, “It was really in that group that I started letting go and started writing fiction.”

She describes The Last Book Party as “the coming of age story of a writer. It’s about that time of your life in your mid-twenties when you’re trying to figure out what you want to be.”

Books will be for sale at the event. (Please note that the Library will be open that night for this event only. No regular library services will be available.)