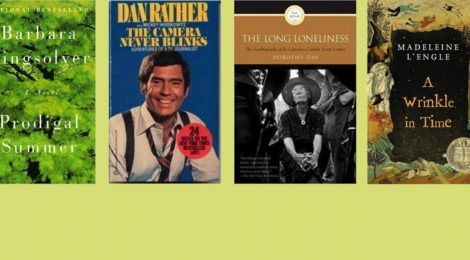 Books That Inspired Local Residents to Build a Better World

Among its other charms, summer is a great time to read books, as some of the demands of the rest of the year temporarily fade away. With that in mind, the Bookmark often devotes one of its summer columns to books Pelhamites love. As the theme of this year’s Summer Reading Program is “Build a Better World”, we asked some local residents to tell us about a book, or books, that inspired them to make the world a better place. Their selections are below. Enjoy!

Jacob Bolton, Associate Pastor, Huguenot Memorial Church
Fashion Me a People: Curriculum in the Church (1989) by Maria Harris and Rules for Radicals (1971) by Saul Alinsky.
Fashion Me a People looks at the entire practice and scope of Christian education, from birth to death. Alinsky’s Rules for Radicals focuses on how to effect constructive social change.
Said Bolton: “Both books discuss the power found in community and the social change for good that communities can enact in the world.”

Lynn Honeysett, Executive Director, Pelham Art Center
A Wrinkle in Time (1962) by Madeleine L’Engle.
Winner of the Newbury Medal in 1963, the novel is a blend of science fiction and fantasy, following a journey through space and time of brother and sister Meg and Charles, and their friend Calvin.
Said Honeysett: “I loved the doors it threw open beyond the everyday, causing me to think about other worlds, other dimensions; wondering in a magical, expanded way. And love wins. A philosophy I still live by.”

Eileen Miller, Co-President, Friends of the Town of Pelham Public Library
Prodigal Summer (2000) by Barbara Kingsolver.
This novel, originally published in blank, has been described as “a hymn to wildness” weaving three stories about human love against the terrain of southern Appalachia.
Said Miller, who read the book in 2002: “There were a lot of plots happening at once, but the message I got was about the environment, specifically how everything is interconnected. I’m sure I knew this before, but it made me think seriously about how pesticides and other human influences can dramatically affect the entire ecosystem. This stayed with me and gave me a greater awareness of what humans are doing to our world, and inspired me to try to be more thoughtful about my own actions.“

Susan Mutti, former Village of Pelham trustee, and Education and Outreach Manager, Pelham Art Center
The Tipping Point: How Little Things Can Make a Big Difference (2000) by Malcolm Gladwell. The phrase “the tipping point” really entered the vernacular through this book, which examines “that magic moment when an idea, trend, or social behavior crosses a threshold, tips, and spreads like wildfire.”
Mutti, who read the book about 10 years ago, said: “I was fascinated by the concept of social epidemics and how things become wildly popular. This book inspired me as I worked on two local projects in Pelham, renovating Wolfs Lane Park and establishing the Highbrook Highline. These projects involved creating enthusiasm and support of residents in order for them to go from idea to reality.”

Katharine Page, co-founder, Confident Kids Club
The Nightingale (2015) by Kristin Hannah.
The Nightingale, by thriller writer Hannah, is a historical novel that tells the story of two French sisters – one living in Paris, the other one in the countryside – during World War II who are part of the French underground.
Page, who read the book this summer, said: “This book had a tremendous influence on how I feel I can make the world a better place. It made me realize the importance of continuing to develop resilience and courage in the young children with whom I work.”

Bob Tracy, one of 2017 Pelham Civics’ “Persons of the Year”
Robert Kennedy and His Times (1978) by Arthur Schlesinger.
“I found his story inspiring, although obviously tragic, because the more he became exposed to the plight of African Americans, native Americans, migrant farmers, and other marginalized groups, the more compassionate he became and more interested in helping to improve their lot.”
The Long Loneliness (1952) by Dorothy Day. This book follows Day from her time covering poverty in New York as a reporter, to her eventual religious conversion and founding of the Catholic Worker movement.
“Based in the lower east side of Manhattan, she served and advocated for the poor, for civil rights, and against war and nuclear proliferation. As idealistic she was, she also was very much a pragmatist.”Tracy also cited To Kill a Mockingbird because those who aspired to be lawyers, “ … all wanted to grow up to be Atticus Finch.”

Rich Zahradnik, Author; Youth Beat Editor, News of Pelham
Two journalism memoirs: The Camera Never Blinks: Adventures of a TV Journalist (1977) by Dan Rather and The Boys on the Bus (1973) by Timothy Crouse.
Sitting in a lifeguard chair in Fishkill, I read Dan Rather’s The Camera Never Blinks, then The Boys on the Bus by Timothy Crouse. (It was an apartment pool, often with no swimmers.) It was the summer before college. After the first book, I was going to be a TV newsman. By the second one, I was working in newspapers. I can say it explicitly now, but I somehow already knew back then I could make the world a better place by telling the world what was going on in the world.”

It’s always intriguing to see the diverse range of books Pelhamites are reading, the old and the new, fiction and non-fiction, children’s books and adult fiction. Thanks to all who participated for sharing their experiences with books that influenced them.

This article originally appeared on pelhamplus.com and in the News of Pelham.