Browse: Home   /   The Battle of the Books: The Parents’ Perspective 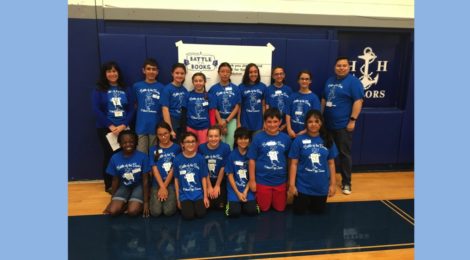 The Battle of the Books: The Parents’ Perspective

For the last four years, there’s been a competition each fall in Westchester that has nothing to do with cleats, balls or helmets.

It’s the annual Battle of the Books (BOB), in which 18 teams from libraries in the Westchester Library System compete in a day-long trivia competition based on a list of five books that each team reads, re-reads and studies, in preparation for the big day. Books for the younger team competition included Ms. Bixby’s Last Day by John David Anderson and The Witches by Roald Dahl. The older team read books including Harry Potter and the Sorcerer’s Stone by J.K Rowling and Everything Everything by Nicola Yoon.

The Town of Pelham Public Library has been part of it from the start, and, this year – for the third year in a row – it sponsored two teams, one for younger children (the Pelham Page Turners) and one for teens (the Pelham Bookworms). BOB 2017 was held on October 21 at Hendrick Hudson High School, and the Page Turners made it all the way to the semi-finals!

The competition follows months of preparation. The teams are formed in the spring, and the team members usually read the five books for their level of competition over the summer. In September, the official practices begin, as the teams meet at the Library at least once a week for practice with coaches Augusta Turner and Oz Coto-Chang. Adult Services Librarian Turner coaches the Page Turners, and Youth Services Librarian Coto-Chang coaches the Bookworms. There are even pre-competition scrimmages.

Team members have always said BOB is a fun — and intense — way of diving into books, but this year, Bookmark asked three parents whose children competed to see what the event was like to experience from their point of view.

MaryAnn Bekkedahl, mother of Pelham Page Turner Celia Parent, first heard about BOB on the soccer sidelines: “It sounded like something Celia would enjoy AND something we’d love her to experience for its team orientation, public speaking, and because it’s different from all her other sports-related activities. She’s a reader, and having a way for that hobby to be a team sport and involve competition was very appealing to us.”

Pelham Page Turner Irene Basu, who competed for her second time, learned about BOB through the Library’s Summer Reading Program, though she had to wait until she was old enough to participate. Her father, Indrani Basu, explained “Irene is truly a bookworm. She liked to read books way before her pre-kindergarten days. I always encouraged her to read books by holding them rather than following electronic readers and gadgets, so, she ended up going to the library and also started to participate in the summer reading program. That’s how we came across a flyer in the library for the BOB tournament in 2015.”

The Vitale family had two competitors: Ava, on the Bookworms and sister Cararose, with the Page Turners. Their father, Thomas, said the excitement started early: “They were instructed by their coaches to read each book five times over the summer, but they far exceeded that recommendation. They also went through the books to pull out details, worked with their friends to quiz each other, and excitedly discussed the upcoming event throughout the summer.”

What was it like to be a parent on the day of the competition?

“We drove one of Celia’s teammates to the event, and the whole way up they quizzed each other,” said Bekkedahl. “I was so proud of them and their determination! I was pleased to have her experience such a well-run competition with its formalities, such as the reading of the rules and the strictness of the judges, as well as the informality of the free time running around the gym between sessions and the pizza lunch.”

Basu reported: “I was amazed to see how smart and competitive the kids are, and how the tournament is getting bigger and better over the years. For Irene, that was a great experience too. She learned how to work as a team and deliver the best under pressure.“

Added Vitale, “My wife and I were thrilled that our girls participated in Battle of the Books! Our children play travel soccer, and when I explained Battle of the Books to friends and family, I jokingly described this competition as “Travel Reading.” I am so happy that an intellectual pursuit for children is elevated to the excitement of sports competition, which doesn’t often happen in our society.”

Thanks for the gift in memory of Karin and Ted Mayer, which helps fund the competition — and, thanks, most of all, to coaches Turner and Coto-Chang.

This article originally appeared in The News of Pelham.